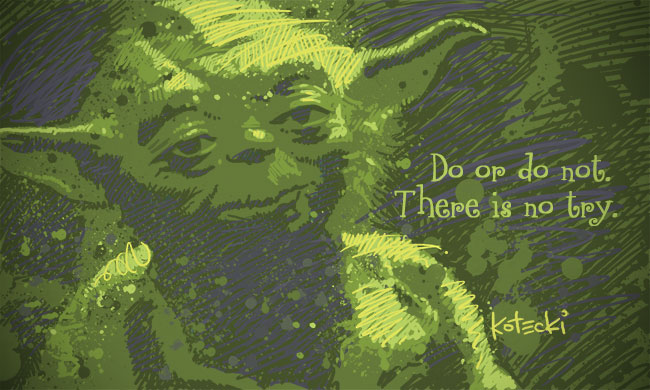 When kids start to talk, they’re bad. Like, really awful. They’re mostly unintelligible and can’t even string more than two syllables together. Compared to a great orator like Martin Luther King, Jr., they should be ashamed of themselves.

A grown-up sure would be, though. We chastise ourselves all the time for not being good enough. If someone sees our feeble efforts, we apologize profusely.

Not kids. They just keep on going.

Part of the reason we struggle so much with learning a new skill or implementing a new system is because we know what mastery feels like. We’re pretty good at doing it the way we’ve always done it, thank you very much.

At the start of this year, I took the plunge into Bullet Journaling. It’s a system created by Ryder Carroll that has been embraced by people all over the world. Its biggest feature is that it eschews digital tools in favor of a good ol’ analog notebook and pen.

I decided to experiment with it for a few reasons. It takes longer to write our thoughts out by hand than by typing them, which causes our brain to slow down a smidge, allowing us to really process what’s on our minds and facilitating a greater sense of mindfulness. Yes, please.

Secondly, the Bullet Journal method fosters a better ability to make connections between past and present ideas because it involves a regular practice of reviewing and re-writing things down.

Thirdly, it helps me to really examine my to-do list. Because I have to write out tasks longhand if they don’t get done, I’m much more discerning about how important something really is to tackle.

And finally, it’s more personal and creative method than a digital system. I can add a doodle here or there, throw in some color, or create an elaborate title for a journal entry. Are these elements crucial? Maybe not, but I find they help me to be more present, and they create a more interesting record of my life that I enjoy looking back on.

All this to say that I almost quit less than one week into it.

Because I wasn’t a master at it.

Although there is an established framework to Bullet Journaling, it’s open-ended enough to allow extreme personalization, making it a system that can adapt and grow with your specific needs.

So that first week, as I began the implementation and customization of my first notebook, I struggled to figure out how to make it best serve me. I lamented the differences with my current method in Evernote, and began to panic that I was making a terrible mistake.

But then it hit me. “This is a new thing; you’re supposed to feel uncomfortable. Of course your Evernote system is a well-oiled machine, you’ve been using and tweaking it for over ten years now. Expecting that this new method is going to operate in the same way right out of the gate is just idiotic.”

That insight led me to flesh out why I was trying this new Bullet Journal thing in the first place. Yes, the digital method has some advantages that this analog version does not, but writing out some of the benefits (like the ones I shared above) made it easier for me to see that the switch was worth the trade-offs. That, and reminding myself that being terrible at it was NORMAL, helped me move forward.

I’m barely a month into it, but I already feel more comfortable and I’ve crafted my process to be even more useful. I’m feeling more in the groove. Not quite like Yoda; more like Luke when he finally deflected the laser fire while wearing a helmet with the blast shield lowered during his lightsaber training on the Millennium Falcon. But I digress.

Although it seems like it should be obvious to anyone with half a brain cell, it appears that we grown-ups can’t be reminded enough that we will not be experts at something on our first try. When you know what it feels like to master something, being a novice again is not very fun. Kind of gross, even. But that doesn’t mean you should throw in the towel.

That new endeavor you just started? It might feel uncomfortable, terrifying, or like you’re not making any progress. First, remind yourself that you’re, you know, normal.

Secondly, literally write out the reasons you wanted to do it in the first place. What’s the “why?”

The reminder slows down the train and keeps you from flying of the rails, and the reasons give you the fuel to keep going. It’ll get easier, you’ll get better, and the effort will be worth it.

And as hard as it may be to believe now, someday you might even graduate to Jedi Master.