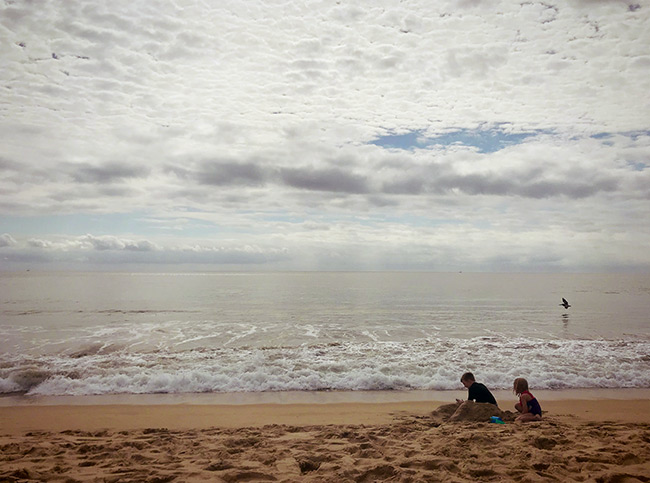 Why do we build sancastles on the beach? I mean, what’s the point? Eventually, the surf will swallow it whole and all the hard work will be for nothing.

That’s what I was thinking as my kids were enthusiastically erecting a stronghold of sand on the edge of the Pacific Ocean. They worked fast. Built it high. And even added a moat for protection.

That led to questions about life. If you’re lucky, you have eight or nine decades to work with, although most of us have much less than that. We busily build families, careers, and accomplishments to be proud of. It’s easy to wonder: What’s the point? Why bother?

You know it won’t last. The surf will eventually win. It always does.

Maybe it’s exciting to see what you can accomplish before the clock runs out.

Maybe it’s to experience a feeling of pride in the little wins, no matter how fleeting, like when your makeshift moat holds off a surge of water.

Maybe the enjoyment comes from the journey, not the result.

Maybe it’s just better than moping and whining about how futile everything is.

Maybe our efforts will make an impact in ways we can’t even imagine.

I am blessed to regularly receive notes from people who have been influenced in some way by my work. It helps me to see that the sandcastles I busy myself with do, in fact, matter. But I know that the feedback I receive now doesn’t tell the whole story. I like to think that in the next life, I will be rewarded with a full account of the effect my life had on others.

I picture a supernatural scene, reminiscent of a Hollywood movie, with soft, glowy lighting. Everyone is wearing fancy white bathrobes like the kind you find in the most expensive hotels, which I know doesn’t seem right, but go with me here. Maybe they’re like choir robes, but super comfortable. We’ll be welcomed home, with high fives and pats on the back. One by one, people will step forward to share how our life influenced theirs. We’ll encounter souls we never met on earth and be shocked to learn how moments in our life that seemed insignificant –– or felt utterly fruitless –– ended up impacting the big picture in unfathomable ways.

It’s like Mr. Holland’s Opus, but in heaven. With, you know, robes.

Back on the beach…the surf eventually won, filling the crater my kids had made.

But they were not disappointed or defeated in the least. On the contrary, after taking a few moments to survey the devastation unleashed by the rogue wave, my son shouted triumphantly, “Mama! We made a bathtub!”

A poignant reminder that, like always, the magic lies in your perspective.