I’ve known Hal since he was five. I’ve seen him grow up – really up. I’ve kept up to date on his progress in school and have had some of his drawings on my fridge at home. I’ve read letters from him, telling me what he got for Christmas, and how he enjoys playing soccer. Hal has been a part of my life for over seven years now. But I’ve never met him.

In person, at least. I’m not sure what Priceline can do on a flight to Ethiopia, which is where he lives. Hailemariam Eshetu (the nickname Hal just became evident, I’m sure) is a little boy (ok, not so little anymore) that Kim and I have sponsored since before we were married. We learned of Compassion International during the intermission of a concert we went to way back when. We learned that it cost 28 bucks a month, which seemed like 28,000 bucks a month to college kids. But we also learned that you could pool resources to sponsor a kid, and that couples, families, and even youth groups had chipped in to sponsor children in poverty-stricken areas all over the world. And what I liked best of all was how involved you could get in the child’s life. They send you photos of the child, and letters and pictures that they draw, just for you. And you can write them back, and send photos of you and that far off place called America. Compassion even offers the opportunity to arrange a trip to meet your sponsor child.

I think we were both impressed that this wasn’t some shady charity advertised in some commercial with hungry kids fending off flies. I wasn’t interested in throwing money at a problem, not even sure where the money was going. Compassion does so much more than just feeding hungry kids. Its aim is to break the cycle of poverty by serving as an advocate for children, releasing them from spiritual, economic, social and physical poverty and enabling them to become responsible, fulfilled Christian adults. It was founded in 1952 and helps more than 600,000 children in more than 20 countries. 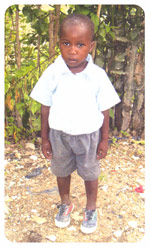 Each year at Christmas, Kim and I try to find someone who would be willing to sponsor a child through Compassion. So without further ado, allow me to introduce Shington, a 3-year old little boy from Haiti. For fun, he enjoys playing with marbles. Please consider sponsoring Shington. I strongly believe that making a real and positive difference in the life of a child is one of the most heroic things you can do in life. I assure you that you will receive way more than you ever give with this program. It’s hard to imagine how $28 a month could be spent any better. It can be an awesome experience to share with your significant other, or an exemplary example of love you could model for your own family.

Kim and I both thank you for considering such an awesome and worthwhile commitment. You can find out more about Shington and Compassion by clicking here.