There is a passage in the Bible in which Jesus remarks about the time he practically got booed out of the town where he grew up. He said, “No prophet is accepted in his hometown.” (Luke 4:24) How true this is. I remember talking to a photographer years ago who commented that the people in his hometown were more impressed by someone from New York, even though his work was more widely acclaimed.

I have the distinct privilege of relating to this verse, now that Kim & Jason has been removed from my hometown newspaper. The News Tribune in LaSalle, Illinois had been running my strip for two years. They decided to pull the plug when I decided to (gasp!) start charging for it. A few years ago, we started a promotion with newspapers in which we’d offer the strip free for a year, no strings attached. At the end of the year, if the paper decided we had a worthy strip and we proved to be reliable in delivering it on a timely basis, we’d charge a nominal fee. 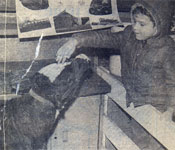 The News Tribune was the first paper to take advantage of the deal. Since then, we’ve had more than a dozen papers pick us up, many of whom are now happily paying for the comic strip. We gave the News Tribune an additional year of running it for free, basically because I felt like giving them a break since they were my hometown paper. I have appeared in that paper many times: a photo ran of me petting a cow on a kindergarten field trip, I often showed up in the regular listing of area honor roll students, and my athletic prowess (it was a pretty small town) earned me several mentions in the sports page when I was in high school. I even WORKED there for eight months before Kim and I got married (I designed ads and formatted auction reports).

We informed them at the beginning of May that we intended to start charging once we reached June. Our proposed fee was $10 per week. Considering they publish six times a week, that comes out to a whopping, budget-breaking $1.67 per strip. They informed us that if we started to charge, they would probably drop us. They said that the only reason they added my strip in the first place was as a favor to help me get started. They said they’d talk it over, and if they wanted to continue running it, they’d call us. Needless to say, we didn’t receive any phone calls, and the other day my dad called to inform me that they had yanked Kim & Jason and replaced it with a syndicated comic strip. Maybe they got a great deal for the other strip, but they didn’t even inquire about negotiating our fee.

I’m not sure if my strip will be missed. My parents claimed that there was quite a little Kim & Jason following established in the area. I have delusional visions of a scene straight from the movie Frankenstein in which the angry townsfolk storm the paper with torches, demanding to have Kim & Jason reinstated. But I know the reality. Even though a good number of people might miss the strip, most of them won’t take the extra effort to write or call the editor in protest. People are busy, and that’s life.

So now Kim & Jason is running in one less paper. It seems like a well-done comic strip created by a hometown boy and read all over the world would garner a little more interest, but according to the wisdom of Jesus, perhaps not.