Maria pointed me to a post on the Kat’s Paws blog about an article that ran in The Boston Globe. It’s about a 45-year-old guy named Peter Lewis who built a treehouse in his backyard. A glorious, wonderful, 250 square foot, two-story treehouse featuring a wood stove and retractable staircase “to keep the girls out.” 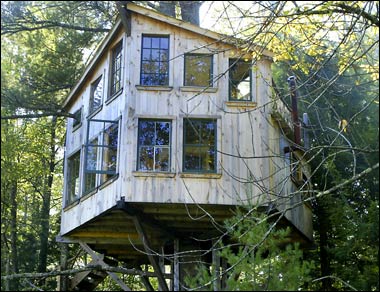 Lewis, a writer, uses the getaway as a place to get some work done. And sneak in a few naps. As I travel around the country encouraging people to escape adulthood, I am always mindful of the people with suspicious looks. The ones who think that “escaping adulthood” is marked by those irresponsible few; the ones in the middle of a midlife crisis with a few screws loose to boot. However, the article points out:

Lewis is adamant that he didn’t build the treehouse as the result of a midlife crisis. He didn’t do it to learn how to be a kid again, he says, because he has never stopped being one. And though it was a great and sometimes overwhelmingly difficult experience, he wouldn’t describe it as cathartic. ”I tried to come up with some deep, philosophical reason for building the treehouse, but it was just a silly idea and I felt like doing it. Fortunately, I had a very understanding wife and enough scrap to pull it off.”

Lewis was also fortunate to have the example of his parents. In the article he acknowledges:

“My parents were both very creative people who thought way outside the box. Mom told me that dreaming was important and that dreaming big was what set people apart.” The catch, she told him, is to act on those dreams. ”In other words,” he says, ”go ahead and think up great and sometimes odd ideas, but then make them happen.”

For more on Peter’s treehouse, you might want to check out the coffee table book, Treehouse Chronicles: One Man’s Dream of Life Aloft

All of us have at least one silly, childlike idea in the back of our mind that goes unpursued because we’re afraid. We’re afraid that people might think we’re nuts.

Here’s a newsflash: we’re all nuts.

But shelving a dream because you’re afraid of what other people might think is REALLY nuts. That’s our problem. That’s why everybody is so stressed-out: everybody is going nuts because they’re afraid to do what they really want for fear that people will think they’re nuts. Got it?

Here’s to dreaming big and following through on “silly” ideas.