Kim and I are off to San Francisco early tomorrow. Too early.

I am looking forward to the speaking engagements I’m scheduled for. On Sunday, I’ll be doing an afternoon family retreat in Redwood City, and on Monday night we’ll be in Pleasanton for a faith enrichment series for adults. Hopefully somewhere in between, I’ll be able to drop Kim off at Alcatraz…heh heh heh. 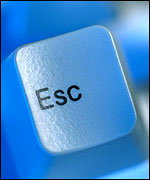 The Escape Plan is off to a great start and I get most excited reading about the experiences of others who have elected to join us. It has been a pleasure to see the creativity and passion bubble up. (By the way, anyone can play along; just start on challenge numero uno. The more the merrier!)

I heard a story about one of the men who died in the West Virginia coal mine accident, and it really got me thinking. I believe I heard that he was only two months away from retirement. What is interesting to me is that most often, such a story is treated as a tragedy, as in “oh, he was so close…”

While it is a tragedy that he died in such a terrible way (not to mention the suffering the families went through), I think it’s telling that the emphasis for most people is on how close he was to retirement, a date on the calendar. They say life is all about the journey, not the destination. But we don’t often live like that. Many of us gear our lives around some arbitrary date in the future, as if everything will be better when that point in time — that day on the calendar — comes. But what makes THAT day on the calendar any better or more important than THIS day on the calendar? Nothing. The only reality is that today is all we have, and that other day may never come.

I think that’s way The Escape Plan is so important to me. It’s about embracing each day as it comes, with the joyful exuberance of a child. It’s not about living for retirement, or for next year, or for that mystical day when everything will be better because (fill in the blank.)

I want to live life on purpose. No worries. No regrets.