Jason and I got a chance to catch an episode of “Honey We’re Killing the Kids” the other night on TLC. I was, like many people, intrigued by the concept. The premise deals with the important issue of childhood obesity. In true reality TV fashion, an expert (in this case, a nutrition expert) comes into an “extreme” household and shakes it all up, giving them challenges that are meant to improve their lifestyles. Some of the challenges have included: “Sack the sugar,” “Family eats together,” “Set a bedtime routine,” “Limit television hours” and “Exercise together.”

It’s so sad that these “challenges” are even called “challenges.” Of course, the families that get picked for these types of shows always have those parents who make you wish you needed to have a license before you’re allowed to be parents.

The family they highlighted on the episode we watched definitely needed some major help, to say the least. However, I completely disagree with how Dr. Hark went about “helping” them. Her motives were pure, yet, in my opinion, her methods were flawed!

The family was addicted to greasy fatty foods. They fried almost everything. In an attempt to get the family eating healthier Dr. Hark provided them with menus for the first three week 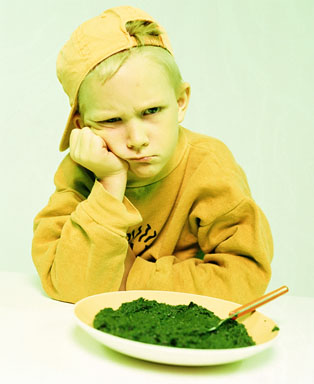 s. The first two meals the family had together included beet salad and tofu scrambler. The kids had a fit! There ended up being a major power struggle fight at the table, as the parents tried to force their 12-year-old to “take 3 more bites.” It was dramatic, to say the least.

Here’s my issue: beets and tofu.

How about starting with things they might actually like and cooking them healthier? How about introducing some new healthy foods that are consumed by the average family. What ever happened to fresh green beans or peas? How about some baked chicken, knowing that the kids loved fried chicken? This is setting the kids up for failure- big time! What have they learned about eating healthy? It stinks! (Just like the nasty tofu.)

My other big beef with the show was regarding the way Dr. Hark encouraged the kids to exercise. All three daughters were used to spending their time watching TV and playing video games (not an uncommon epidemic these days). So, they needed to discover that exercise can be fun. Dr. Hark decided that all three girls, ages 12, 14, and 15, needed to join cheerleading. She said that being involved in this organized sport would increase their teamwork and social skills, as well as their activity level (all good points). However, the oldest was not “into” cheerleading. She said it was for “girly-girls.” My guess is that she was more of a basketball, soccer, or volleyball girl. Why not let her play a sport SHE picks? Nope, she needs to “stick with” cheerleading. Of course, she hated it, felt even more self-conscious about her weight while being there, and stubbornly told her parents that she would rather slide down a slide of razor blades into a pool of alcohol. Nice way to encourage her to exercise, right?!

I thought for sure Dr. Hark would ask her what sport she would like to learn. Nope. They made her go back to cheerleading. YIKES! Another set-up for failure.

At this point in the show I was furious.

Common sense, people! Giving people choices goes a long way, especially for kids. Would you like green beans or carrots tonight? What type of exercise would you like to try? What are you interested in doing? It doesn’t matter what you pick, just so you enjoy exercising.

This is NOT rocket science. I realize that the show would not have had “enough” drama had the kids eaten the meals willingly and had the eldest daughter not humiliated herself at cheerleading. So, that leads me to believe that this show is not really trying to help this family. It is only trying to “use” them for ratings.