Readers of this blog, fans of Kim & Jason, and people who think cancer is stupid may be interested in www.clicktocurecancer.com, an online auction with proceeds going to the fight against cancer. There are a ton of neat things up for bid, including a few unique Kim & Jason related items of note: 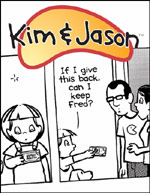 Become a Cartoon Character!
“Ever wondered what it would be like to see yourself in a comic strip? Now you can! The top bidder of this prize will be drawn into an upcoming Kim & Jason comic strip as an ‘extra.’ The daily comic strip, drawn by Madison cartoonist Jason Kotecki, is published in several Midwest newspapers and is read by thousands of people all over the world.”

Escape Adulthood/Custom Drawing
“Claim your very own custom Kim & Jason drawing from Madison cartoonist Jason Kotecki. The one-of-a-kind artwork will be personally sketched in pencil and signed by the artist. Also included in this package is an autographed copy of Jason’s book, Escape Adulthood: 8 Secrets from Childhood for the Stressed-Out Grown-Up.”

These prizes are actually pretty rare. I get asked all the time, but I’ve never ever drawn anyone into the Kim & Jason comic  strip before, and I really only do custom drawings for Level 3 Club K&J subscribers. Hopefully we can help raise a good chunk of change for a good cause. The auction runs from October 13-23, 2006, so get bidding now!