5 Things You Didn’t Know About Me

I must be in the minority, but I never was a big fan of tag. Or rather, I was never a big fan of being “it.” Being “it” was alright as long as you weren’t “it” for too long. Once you exceeded a certain amount of time as “it,” you very quickly approach a harrowing state of shame and humiliation. Maybe that was just me.

Well, I’ve been tagged. Tagged by a fellow blogger, Mr. Make it Great, Phil Gerbyshak. Now that I’m “it,” this particular game requires me to share 5 things that other people don’t know about me. I like this game a little better, because I have some control over how long I have to be “it.” But in the spirit of tag, I shall now share a few things that put me in danger of entering a harrowing state of shame and humiliation: 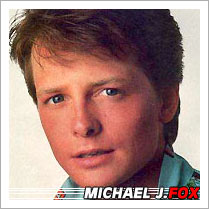 1) When I was an adolescent, I had a picture of Michael J. Fox taped to my ceiling. Over my bed. Why? I thought he was cool. (And I didn’t realize just how gay that seemed. Not that there’s anything wrong with that…) But before you think this is a post about me coming out of the closet, let me also say that I had about 15 pictures of Elle McPherson on display (torn from the highly coveted Sport Illustrated Swimsuit issues.)

3) When I was about three or four, my parents used to dress me up in a brown plaid robe and carry me around the house while singing “Scandinavian Hotshot.” I think it’s a real song, but I’ve never heard it and I don’t know what it means. From time to time, they also intermixed “Gonna Fly Now,” the theme song from Rocky.

Now for some cool ones…

4) I was named the co-captain of my varsity baseball team. I played second base (like my hero, Ryne Sandberg) and one time I caught a fly ball with my bare hand. 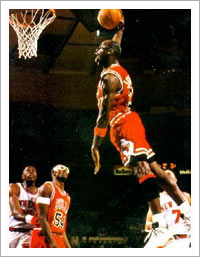 It was a high pop hit to short right field. I scrambled out to get it and got a little disoriented. (Those things can be tricky.) I finally located the ball and at the last minute, reflexively thrust out my non-gloved hand. The ball just stuck — the third out. It was the weirdest thing. Of course, I trotted back into the dugout acting like I had planned it all along and it was no big deal.

5) Finally, I once saw Michael Jordan drop 55 points on the Knicks. I went with some friends to a game while we were in college. The seats weren’t the greatest, but when he hit 50 points, the crowd went crazy. It was awesome.