Last week I had the privilege of addressing a group of elementary and high school teachers at a district wide meeting in Stark County, Illinois. (Read the newspaper article.) I like talking to teachers. Rarely do they have people standing up for them, acknowledging all the hard work they do, and reminding them of why they got into teaching in the first place. It was the first day back from Christmas break, and frankly, I don’t think anyone was too excited to be there. (At least that’s what Kim’s teaching experience has taught me.) After I promised that I wouldn’t say a word about curriculum and had everyone complete an Adultitis intake, I am confident to say that we had a pretty good time. Al Curry (pictured below) was one of the reasons for that… 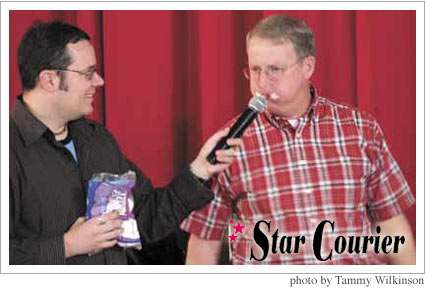 He is a high school science teacher and was the winner (as the picture clearly shows) of the Chubby Bunny contest. He stuffed at least five jumbo marshmallows in his mouth and was still able to perfectly enunciate the phrase “chubby bunny.”

While the group enjoyed his confident display of marshmallow domination, I enjoyed my conversation with Al after the presentation. He told me about one of the ways he manages to remain Adultitis-free. Every summer, he and his college-age son go on a motorcycle trip. Their biggest expense is gas, as the duo eats cheap and sleeps in tents. They’ve seen a lot of the beautiful wide-open spaces of this country, including Yellowstone, the Badlands, and scenic Minnesota. The Grand Canyon is at the top of their wish list.

Al relayed a story about a trip his son took to a leadership camp in Washington, D.C. when he was in high school. According to Al’s son, there were a lot of well-off Ivy League kids there. A discussion came up about what kinds of cars everybody had, and names like BMW and Mercedes surfaced. They were aghast to learn that Al’s son didn’t own a car.

“I have an old motorcycle, though,” he sheepishly offered.

“Yep. Me and my dad go riding every summer.”

That led to an hour long discussion about the summer road trips. The East Coast kids were mesmerized. According to Al — and I think he’s right — his son’s new friends were probably not as interested in the stories of the road as much as they were perplexed by the concept of actually having quality time with Dad.

They say time is money. I don’t know about that. All too often in today’s world, parents try to substitute money — and BMWs — for time, as if they were an equal swap. It never ceases to amaze me that no matter how young or close to adulthood a child is, they would always rather have time than money.

A motorcycle trip to the Grand Canyon with your son: Priceless.