These three men have something in common, and that connection is the very reason I have been inspired by them. They are all great promoters. But even more than that, their style of promotion always contained within it a spirit of childlike fun. 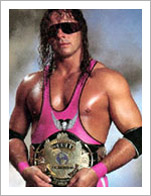 I grew up watching pro wrestling. (My favorites? Bret “The Hitman” Hart, “Rowdy” Roddy Piper, and Randy “Macho Man” Savage.) Vince McMahon, the owner of the WWF (now known as the WWE), has always impressed me with his promotional abilities. It’s unfortunate that he tends to get some of his ideas straight from the gutter, but in the heyday of the WWF, he brilliantly created characters and crafted story lines that really pulled you in and got you excited. Wrestling was colorful, larger-than-life, and fun.

I read a book a few years back by Sam Walton, the founder of Wal-Mart. Of course, depending on who you talk to these days, Sam and his company are now carrying out Satan’s plan to rule the world. But Wal-Mart’s current humongousness causes folks to easily forget that at one time not long ago, Wal-Mart was a scrappy start-up, and few people believed Mr. Walton had any chance to succeed with his “wacky” business model of putting department stores in small town with tiny populations. What stood out to me as I read the book was learning about Walton’s creative and fun approach to promotions. Here is an excerpt from his book, about his very first venture running a Ben Franklin variety store:

We tried a lot of promotional things that worked really well. First, we put a popcorn machine out on the sidewalk, and we sold that stuff like crazy. So I thought about it and finally decided what we needed was a soft ice cream machine out there too. I screwed my courage up and and went down to the bank and borrowed what at the time seemed like the astronomical sum of $1,800 to buy that thing. That was the first money I ever borrowed from a bank. Then we rolled the ice cream machine out there on the sidewalk next to the popcorn machine, and I mean we attracted some attention with those two. It was new and different — another experiment — and we really turned a profit on it. I paid off that $1,800 note in two or three years, and I felt great about it. I really didn’t want to be remembered as the guy who lost his shirt on some crazy ice cream machine. 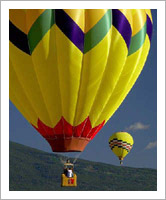 I recently finished up a book by Joe Vitale about P.T. Barnum (of Barnum & Bailey circus fame), and again was impressed by the outlandish, creative, and downright childlike promotional ideas he used to promote his various businesses. Like the time he had an elephant plowing the field on his property to attract the attention of train passengers speeding by on their way to the city. Or when he became the first person to bring live hippopotamuses to America to promote his museum. He also was one of the first people to have a man in a hot air balloon attempt to cross the Atlantic.

It is from this inspiring sense of fun and spectacle that we devised the idea of our most recent Lemonade Stand event. I think it all started from a discussion I had one night wiith my brother Doug. We were trying to come up with some fun marketing ideas, and I blurted out, “You know what would be awesome? Giving away a freakin’ hot air balloon ride.” Maybe the spirit of P.T. Barnum was being channeled, but we both loved the idea. It took several weeks to decide that the idea was actually actionable, and thus we launched our Kim & Jason Easter Egg Hunt, with the grand prize being a trip in a hot air balloon.

The prize was awarded sooner than I imagined (I guess I need to do a better job of hiding it next time;) Yesterday, Kimberly Sellers from Pennsylvania e-mailed with the secret code word indicating that she had found the prize egg. An excerpt of her e-mail is priceless:

I had to keep reading this. Are you serious? I won? I so can’t believe it. oh my gosh. I think I am just sitting here having trouble typing. My husband isn’t going to believe me! This is so cool!!!!!!!!!

Yep, that is pretty cool. And I am left with a few thoughts. Every business is trying to get the word out about what they do. We could have easily spent several hundreds of dollars on a boring newspaper ad that would be glanced at by a small percentage of people and then be pooped on by dogs all over Dane County the next day.

I’d rather put my marketing budget into something fun like this. The buzz spreads, somebody wins something really cool, and a story gets passed on. Meanwhile, the very prize we gave away empowers the winner to do exactly what we advocate: to embrace a more childlike way of living life with less stress and more fun. This (and the previous promotion in which we gave away someone’s wishlist) have been fun and educational experiments.

Fasten your seatbelts kids, because more stuff just like this is on it’s way.

(By the way, even though the hot air balloon ride has been rewarded, there are still plenty of eggs that contain some neat prizes hidden throught the store. Have fun!)