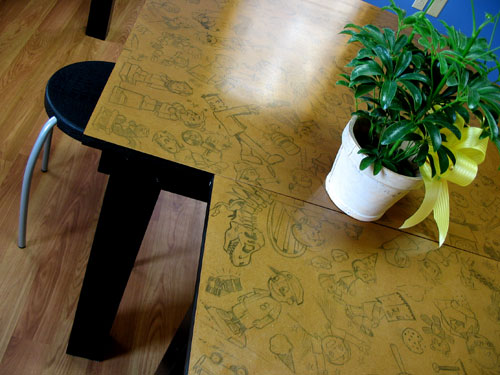 Our open house was a big hit last Saturday. It was nice to have a firm deadline to get the new office ready, and it was nice to see family and friends that I hadn’t seen in way too long. (The 14 straight hours of sleep Sunday night was also quite nice.)

It’s amazing how quickly snow cones and cotton candy can help people escape adulthood. And it’s uncanny how consistent children are in their desire to combine all possible snow cone flavors.

I think my favorite part of the whole space are the tables in the conference room (we gotta come up with a better, less corporatey name for that room). There are four tables in all, constructed by my dad and decorated by me. We were originally going to paint some checkerboards on them, but then I was inspired by the background image on my blog and thought it might be neat to cover the tabletops with a collage of Kim & Jason sketches. I knew it would be a big job, but once I thought of it, I couldn’t not do it.

Many, many hours of drawing and six coats of polyurethane later, the tables were finished and turned out pretty darn good. Part of the reason I consider them a highlight of the space is because they were a team effort between me and my dad. To me, it’s a great symbol of all of the support my parents (and Kim’s parents, too) have given us over the years. I’m sure they thought we were a little bit unstable when we first started this company seven years ago. Since then, they’ve supported us in many ways. Some of the support has come financially, but it sure is hard to put a price tag on the value of their encouragement, prayers, and belief in us. There have been times when we were about ready to throw in the towel. Knowing that they believed in us gave us the strength to keep going on the hardest days.

The tables my dad built are the most stable tables I’ve ever seen. And stable is the perfect word to describe the foundation our parents have built for me and Kim. They gave us the gift of wonderful childhoods, taught us the value of hard work, and believed in us when not many other people did.

Thanks, you guys. We couldn’t have made it this far without you.