Remember Jeff Foxworthy’s, “You might be a redneck if…”? Classic! Recently in our speaking gigs we have started helping audiences identify their Adultitis by giving some examples in a similar way. For instance, you might have Adultitis if… you consider your cell phone a body part. You might have Adultitis if… it’s dark when you leave home in the morning and it’s dark when you get home, and you don’t live in Alaska.

This last one is quite an issue. I happened upon an article talking about the trend of commuters leaving earlier and earlier, while also leaving work later in the day to avoid the traffic, only to find themselves pulling 12-13 hr. days.

On paper it makes sense to beat the rush and feel less stressed. In reality, however, lifestyles are becoming more stressed because of the adjustments that need to be made in order to accomodate to this shift… earlier bedtimes (taking away from evening down-time and relaxation), later dinners (leading to a more stressful and shortened family-time), and a decrease in exercise due to the lack of free time. All of this is done in an effort to avoid 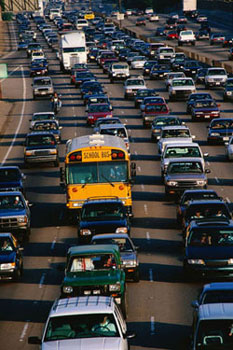 the stress of the commute. What a mess. It’s a vicsous cycle of stress.

One woman featured in the article said that she has to leave home at 6AM and doesn’t leave work until 6PM, to avoid the traffic. She has a two-year-old daughter and her and her husband are unsure about having more children, because of the challenge in taking care of one. They depend on her parents and in-laws to watch the little one. They’ve learned to build the long days into their lifestyle.

“We just try and make it work,” she says. “My husband is very supportive of my career. He’s offered to move close to my workplace, but I just really enjoy where we live.”

It sounds like she hardly has time to actually live there. Looks like a classic case of living for the weekends.

Another example in the article was much more refreshing. A guy from NJ leaves at 5:15AM each morning to get into Manhatton for work, but instead of going right to work he goes running in Central Park, then to the gym to work out and shower, all before arriving at work at nine. He is a marathon runner and uses this early morning time to train. He shares,

“I could’ve chosen the path of ‘woe is me’ and fight the traffic and let it destroy my life. Instead, I’ve turned it around and made it a positive for my health and a hobby I enjoy greatly.”

You can bring positive things from the challenges in your day-to-day life. Jason and I met a great couple from LA last year who has made it their mission to provide “Practical Audio Training for People on the Go.” Check out Freeway Guides. They are encouraging people to use that commute time for self-improvement. You can also learn a second language, or even catch up on your favorite podcast.

The lesson here is simple. YOU are in charge of your life. If it’s a stressed-out mess, it’s time to stop blaming your circumstances and start moving towards change.

What does your daily schedule look like?
Are you finding a good balance between work, family and alone time?
What can you do to take more control of your life, for the good of your health and sanity, as well as your relationships?