Lessons From the Guys Who Gave Us Hula Hoops 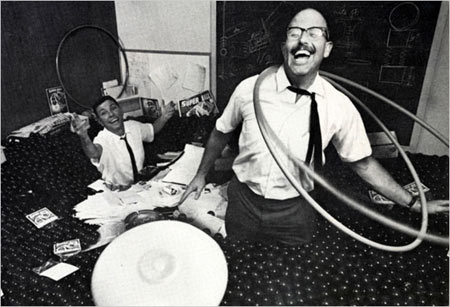 It’s always sad when someone who impacted your childhood positively passes away. Obviously, parents, grandparents, teachers and coaches top the list. A loss can also be felt when a much-loved television personality (like Fred Rogers) dies. But what about the inventor of your favorite toy?

Rich Knerr, co-founder of the toy company Wham-O, died last Friday, at the age of 82. His partner, Spud Melin passed away in 2002. Their first big hit was the hula hoop, of which 100 million were sold in just two years. That sounds like the makings of a true one-hit wonder, except for the fact that the duo is also responsible for bringing us the Frisbee. And the Super Ball. And Silly String. And the Slip ‘N Slide. Are there lessons we can take away from someone whom we’ve never met, someone whose name we’ve never heard, someone who spent his life making fun things?

The first lesson involves the concept of luck. The Wikipedia entry on Wham-O claims that after the success of the hula hoop, “they got lucky again with the Frisbee.” Luck schmuck.

You don’t create a stable of classics with just a pocketful of luck.

The Roman dramatist, philosopher, and politician Seneca said, “Luck is what happens when preparation meets opportunity.”

Starting out in the Mr. Knerr’s parents’ garage, college buddies Rich Knerr and Spud Melin did a lot of research to find ideas, which often included traveling all over the world. And since they targeted their products for children, they regularly went to playgrounds to reach them. The idea for the Frisbee came at the beach when they saw a building inspector named Fred Morrison tossing around a flying disk he’d invented that he called the Pluto Platter. Knerr and Merlin bought the invention from him, made some tweaks, and changed the name to Frisbee.

The Wham-O founders were always in the mindset of looking for the next great idea. They brainstormed, they researched, and they put themselves in places and situations that increased their chances of reaching their goal. When an opportunity presented itself, like a chance seaside encounter with a guy named Fred and his Pluto Platter, they sprung into action.

According to a New York Times obituary, Mr. Knerr attributed Wham-O’s success to an indefinable mix of serendipity (opportunity) and hard work (preparation). “It took us nearly two years to get the kinks out of the SuperBall before we produced it,” he said in an interview with Popular Science in 1966. 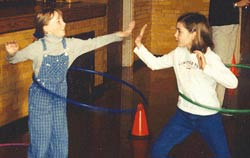 The other lesson to be learned is that fun doesn’t have to be expensive, and it doesn’t have to come at the expense of others. The hula hoop originally sold for 98 cents. A far cry from the several hundred dollars needed to own one of today’s hot video game systems. Or animatronic talking stuffed bears. On the subject of what passes for fun these days, bestselling author and newspaper columnist Mitch Albom made this great observation:

Today, kids’ fun has to be at someone’s expense. Blowing up your opponent is fun. Clobbering your friend in Madden football is fun. Insulting people on MySpace or laughing at a geek on YouTube is fun. You don’t see kid “crazes” anymore — the way SuperBalls or yo-yos were crazes. Today, a kid craze is cell phones or PlayStations. Today, the idea of bouncing a ball seems so incredibly lame, you’d wonder if the kid doing it had problems.

But that’s the thing. We didn’t have problems. Not like they have today. We didn’t dream of torching the school, having sex with our teachers or getting back at enemies by destroying their reputation in cyberspace.

I can’t help but wonder what the world would look like if our sense of fun looked more like it did when hula hoops and frisbees were the must-have Christmas gifts. Is it too simplistic to believe that some of today’s problems have been caused by losing our way in how we have fun?

There’s a pretty good chance you’ve never even heard of Rich Knerr or Spud Melin before today. I hadn’t. Fortunately for us, we’ve been left the fun stuff they created while they lived. But let us not lose sight of the lessons their lives and work taught us: Success has more to do with a strong curiosity and hard work than it does with “luck,” and fun doesn’t need to be expensive or come at the expense of others.