Do You Suffer From Sunday Night Dread? 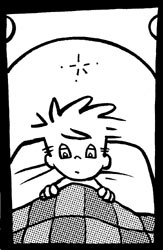 When I was a kid, there was nothing worse than a Sunday night during the school year. The foreboding end of weekend freedom was perilously near. As the sun set and the clock ticked older, the pit in my stomach grew and grew. I did well in school, but thinking ahead to a week of early mornings, boring lectures, bad lunches, stupid bullies, and unexciting homework was hardly a thing to look forward to.

I was suffering from Sunday Night Dread.

On Friday afternoon, the future unfolded before me with endless possibility. The freedom was intoxicating and the sky was the limit. On Saturday, I knew the clock was ticking, but took comfort in the fact that I still had a whole day left in the bank. But there was no escaping Sunday Night Dread, with its whispers of Monday growing ever louder as the day wore on.

I used to believe that Sunday Night Dread was a condition that only affected school children. A graduation from formal education taught me otherwise. I discovered that a vast majority of adults also suffered from Sunday Night Dread, complete with the anxiety of another week of early mornings, boring meetings, bad lunches, stupid bosses, and unexciting work. It is so widespread that a restaurant chain has achieved great success by embracing a theme – Thank God It’s Friday – which is the antithesis of Sunday Night Dread.

Once I got married and started full force into my career as a freelance illustrator and designer (which evolved into what I do today), I have never really suffered from Sunday Night Dread. I was finally doing what I loved and actually looked forward to Mondays.

Sunday Night Dread is still a major factor for most people. But it doesn’t need to be.

On his show, The Big Idea, Donny Deutsch interviews people who are doing what they love and in many cases, have made millions doing it. During one episode, he made this statement: “If Sunday night feels different than Friday night, you’re doing something wrong.”

Re-read that sentence again, and let it sink in.

If you’re on the right path, Friday should feel no different than Sunday or Tuesday or any other day of the week. You should have a passion for your work that doesn’t shut off when it’s time to go home. It should keep you up at night (in a good, excited-to-get-going-the-next-day sort of way.)

If you aren’t thrilled with your job and are experiencing Sunday Night Dread, you probably fall into one of two camps. Either you know exactly what you’d rather be doing (and, for a variety of reasons, stay put), or you have no idea what you’d rather be doing. Whole books have been written about what to do if you’re in either camp, but let me offer a few simple steps to get you started.

Scenario #1: I know what I’d rather be doing, but I can’t do that!
If you’re sticking in a career that fosters Sunday Night Dread even though you have a bigger dream deep inside, you have at least one obstacle in your path, and that obstacle is called fear. You may say, “That’s not true; I just can’t afford to lose the great benefits that come with this job.”

Really? The truth is that you’re afraid that you might get sick and go bankrupt if you give up those almighty benefits. I can’t get into every potential roadblock you’re dealing with, but if you’re honest with yourself, you’ll notice that it usually boils down to fear.

Combat this fear by spending time thinking about what you might lose if you don’t make the leap. Imagine life down the road a decade or two – what will those regrets feel like tomorrow if you don’t go for it today? And what could you gain if you do? A little perspective like that is a great catalyst to remind you that even though it might be painful or scary to act now, it can never match the pain of regret if you don’t even try.

Scenario #2: I’m not crazy about my job, but I’m not sure what else to do.
If you suffer from Sunday Night Dread, but have no idea what you’d rather be doing, you’re a rare individual. I bet you really DO know what you want to do, but have given fear such an upper hand that you won’t allow yourself to consider alternative possibilities.

Awareness if the first step. The sheer act of acknowledging Sunday Night Dread will eliminate a blockage and open your mind to new opportunities. Pay attention to the things about your job you actually like. Or the passions and pastimes you can’t wait to work on when you get home. These clues can help lead you to a life lacking Sunday Night Dread.

No matter what camp you’re in, it’s important to know that if your Friday night feels different than your Sunday night, you’re doing something wrong. You were not designed to toil away with your talents and passions rotting away on the sideline. Take that first step in eliminating Sunday Night Dread from your life today!