5 Dangerous Things Your Kids Should Do 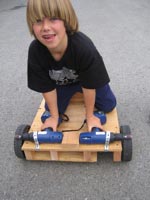 Gever Tulley is the co-founder of the Tinkering School, a weeklong camp where lucky kids get to play with their very own power tools. He’s interested in helping kids learn how to build, solve problems, use new materials and hack old ones for new purposes.

He gave a short speech at a TED (Technology, Entertainment, Design) Conference. The speech was titled “5 Dangerous Things You Should Let Your Kids Do.” Some of the suggestions? Play with fire. Throw a spear. Own a pocket knife.

The current trend, suggests Tulley, is that the end goal of well-meaning adults is to round every corner and eliminate every sharp object. We are caught up in the idea that “anything sharper than a golf ball is too sharp for kids under the age of 10.”

The downside is that any time a kid comes in contact with anything that is not made of round plastic, they’ll be more likely to hurt themselves. And it sets them up to have a hard time coping in the real world, where someone is not always looking out for their best interests. Gever believes that by teaching kids how to, say, control fire, we can help them become more creative, confident, and in control of the environment around them. And they will learn “things you can’t get out of playing with Dora The Explorer toys.” Here’s a video of the talk:

Gever makes a lot of great points. I especially love his suggestion of letting your kids deconstruct old appliances. Even if you don’t know what the parts do, puzzling out what they might be for is a great activity to bolster curiosity.

Perhaps it is a bit strong to propose that this trend of extreme roundification is a case of adults (with Adultitis) ruining everything. But I do think it raises some concerns.

Are we doing a disservice to our children?

I read a book not long ago by Dr. Wess Stafford, president of Compassion International, one of the charities we’ve supported for many years. The book is titled, “Too Small To Ignore.” It includes a fascinating account of Stafford’s life growing up in a small village in the Ivory Coast of Africa as the son of a missionary couple. The contrast between a child’s life growing up in Africa versus growing up in America could not be more stark.

And not in the ways that you’d think.

In Africa, or at least in the slice of Africa Wess experienced, children are more empowered within the village community. They are not looked down upon as a lesser citizen who will someday be an important, productive member of society. Rather, the children are given key — and sometimes dangerous — roles in the harvest and in the protection of the village. If they don’t perform their tasks, the whole community suffers. They are also included around the nightly campfires — no early bedtimes separate from the grown-ups — where they hear stories and absorb the wisdom from the elders.

Far from being victims of slave labor, the children have plenty of time to play. But they’ve been given a gift, an empowering message that says, “You matter. You’re important. You’re a vital contributor to this society.”

In our country, this trend of overprotecting our children contributes to the mindset that children have little to offer us well-intentioned adults. We see it as our job to humor their ideas and shield them from danger until they are old enough to really make a difference. (If you think kids can’t make a difference, check out the blog of ten-year-old Laura.) Meanwhile, in our futile attempt to protect them from harm, we are hindering their self-esteem and enable a destructive rebelliousness which is simply the best way they’ve figured out how to yell, “Hey, notice me. I matter, too!”

Please do not mistake this post as an argument against protecting our children. It is not. Rather, it is a plea to honor their curiosity, appreciate their value, and empower them to contribute in ways that benefit us all. Dangerous thinking, indeed.