Tip of the Week: Outside the Lines

This week’s Escape Plan challenge (aka our Tip of the Week) is #24: Outside the Lines. Figure out a way to add some color to your day in a new, unusual, or wacky way.

Color just makes things more fun. Whether it’s a colorful necktie, hat, fun socks or shoe laces, it proves to be an easy way to add some fun to your day. I know Dr. Seuss would back me up on this one.

If you never did, you should. These things are fun, and fun is good. -Dr. Seuss

Speaking of Seuss, when Jason originally did this challenge for the Escape Plan, he took a page out of Seuss’ book (Not literally- that would be sacreligious). In an attempt to have some fun with the rhymes, like the master, here’s what happened…

He dug deep in the cupboard, and soon he found
a small box of food colors..
red, yellow, and blue- but no brown.

As he stirred and he stirred, the eggs started to scramble.
He added some green. Yes, this was quite the gamble.

His Captain Crunch was quite boring, since the milk was plain white,
So he dropped in some blue, until the shade was just right. 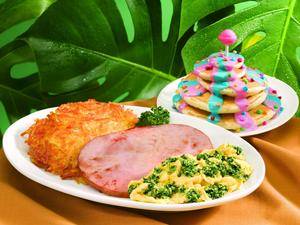 … Okay, that was fun! Jason shared that eating green eggs proved to be like stepping into a time machine.

It’s apparent that the suits at the restaurant chain, IHOP, are quite the Adultitis-free group. Have you seen their recent promotion, tying into the recently released Dr. Seuss movie, “Horton Hears a Who!“? For a limited time (until April 20th), they’ve added four uniquely awesome Seuss-like menu items. If you’d like a simple and yummy way to accomplish this week’s challenge, find the nearest IHOP.

You can choose from the following… (the descriptions even rhyme).

Who-Cakes: (Named after the “Whos” who live on a speck of dust.) Who-ville’s Who-cakes with lots and lots of surprises. Shortcake pancakes of all shapes and sizes. Real boysenberry and blueberry glaze on top. With rainbow chocolate chips and a pink lollipop.

Beezlenut Splash: Springing up from the jungle of Nool. Lemon-lime soda- refreshing and cool. With Cherry and Berry Blue Jello-O – what fun! Slurping up the colors one by one!

The Mayor’s Breakfast: Green Eggs and ham are really the nicest. Scrambled with spinach and just the right spices. Served with hash browns and a choice of Who-Cakes. Or IHOP’S original Buttermilk pancakes.

Jo-jo’s Breakfast: Since a person is a person, no matter how small. A stack of Who-Cakes, but not quite as tall. A scrambled green egg, and ham strip (just one.) A smaller serving for you to join in the fun!

Have fun coloring your week! Leave a comment on the Escape Plan blog to share with us how color brought a smile to your face this week.