Last weekend was Kim & Jason Escape Event #3. The challenge was simply this: Do something fun that is inspired by one of your favorite movies!

Kim and I got talking about “our song” and remembered that it played a big role in the movie Karate Kid, Part II. The song I speak of is Peter Cetera’s “Glory of Love”, which was a #1 hit in the U.S. and won an Academy Award nomination for best song from a film.

We heard it on the radio while we were on our first date, Valentine’s Day, 1995. We both said how much we loved the song upon hearing it in the car on the way to Monical’s Pizza. Ironically (or maybe not so, considering it was Valentine’s Day), we heard it again while sitting in the restaurant. We each ended up buying the CD, and it ultimately became the first song we danced to as husband and wife.

Well, this weekend Karate Kid, Part II showed up on cable, and we realized that we had never actually seen the movie together. So after a busy weekend hosting family, we camped out on the couch and watched the old 80s classic together. I was surprised to learn just how extensive Kim’s crush on Ralph Macchio really was, and Kim was surprised to learn that I had created cardboard action figures based on the characters in the film. (They were pretty sweet, too. Their legs and arms were joined by pieces of rubber band, giving them authentic karate chop action. Hey, these are the sorts of things introverted creative types do…)

For those of you looking for a trip back in time, here’s a video with “Glory of Love” playing over some highlights from the movie:

Ok, now on the WINNER of Escape Event #3 and a set of six movie passes — Club K&J member Lisa Warsinske of Wisconsin! Lisa and her husband Jim took a little inspiration from Driving Miss Daisy and Chevy Chase’s Vacation to create this classic Escape Event moment. I’ll let Lisa describe it in her own words: 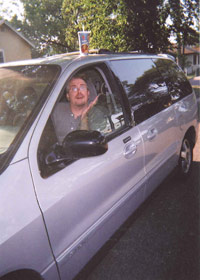 I know, I know – the cost of gas… blah blah blah. BUT you have to find the fun!! This weekend, cool hubby Jim and I took (70 year old fun-loving) Mom to dinner. In and effort to participate in the Escape Event #3 and to have fun along the way – I taped an empty soda cup (complete with lid and straw) on the roof of the van.

It was taped on, not going anywhere and empty – get it? So we go for a nice drive around town…one son and I were in the back seat watching the folks on the street who would spot the cup on our van. There was honking and waving and pointing and yelling…

What fun ensued!!! People are PASSIONATE about letting you know there is a cup on your car. We just wave back and act like we have no idea what they are saying to us, or why they are pointing up. Mom was so funny riding shotgun, giving people a nice smile and oblivious wave accompanied with a cheery thumbs up.

One guy on a bicycle saw us enter Riverside park (LaCrosse, WI) and he rode his bike really fast to the other side to head us off and told us about the cup. Jim admitted to him that it was taped on for a joke and the guy says “Man. That’s a good one. You should video tape it. But hey – promise me you won’t do that with a fake baby!”

A whole volleyball team stopped their game at the beach to scream “STOP!! You have to Stop!!!” Mom just smiled and waved cute. I find our outing a fine combination of the Chevy Chase “Vacation” movie with a little “Driving Miss Daisy” thrown in.

A fine combination, indeed! Cheers to Lisa and Jim for an absolutely stellar Escape Event performance! 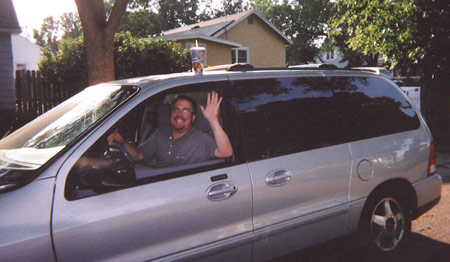