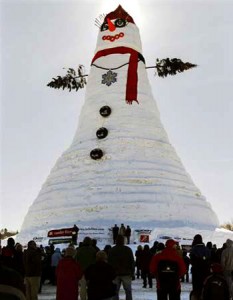 Is it possible for a whole town to be Adultitis-free? I don’t know about that, but Bethel, Maine sure comes close.

In 1999, the ski town of about 2,400 residents set the record for world’s tallest snowman.

This time, they built a “snowwoman” and she was no dainty lass. Her name was Olympia, and she clocked in at a towering 122′ 1″ tall (about 30 feet shorter than the Statue of Liberty) and a scale-tipping 13,000,000 pounds. She featured eyelashes created from discarded skis and bright red lips made from painted car tires. Schoolchildren made her huge red hat and her 8-foot long “carrot” nose. She sported a 100-foot-long scarf and her eyes were made from giant wreaths. Her arms were 30-foot spruce trees! 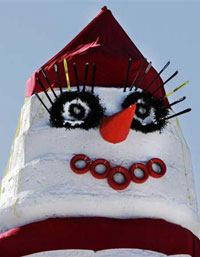 Olympia was built with a series of concentric circles with the help of over 100 volunteers. A crane dumped the snow into frames, and volunteers climbed in for long hours shoveling and packing the snow. It took a little over a month from start to finish.

I think this is the coolest thing I’ve seen in quite some time. (Thanks for passing it along, Marilyn!)

I wonder how many people scoffed at the volunteers who contributed to this whimsical project. “An epic waste of time and resources!” I can imagine them saying. Another example of taking things too seriously.

Lots of people live in areas with snowy winters and the ones with Adultitis spend a big chunk of the winter grumbling about it. A snowy day is an exciting one for kids; a cause for celebration. I know that there are a lot of extra hassles that come with the snow when you’re grown up, but it sure is nice to see a community that still knows how to have some fun with it.

How are you doing in that department?