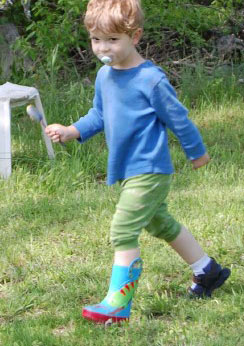 I love this picture. The boy’s name is Henry, the son of a blogger named Sabra, who explained the photo like this:

Because some days you should get what you want.  That’s my explanation for this picture.

Henry is wearing the PJ bottoms he begged to keep on, the shoes he insisted on (one a rain boot and the other a pair of sandals).  He’s eating peanut butter from a spoon and enjoying his binky.

Throughout our lives, starting at the very beginning, we are bombarded with rules.

Many of which don’t exist.

This collection of “rules” come from a wide variety of sources: our best friends, first grade teachers, parents, grandparents, politicians, old dead white guys, and even young celebrity trendsetters sporting more silicone than a non-stick bakeware factory. If we want to be successful, popular, get a good grade, or avoid death cramps when swimming, we listen to their advice.

Some rules were established for practical reasons. And even though the reason for which they were created are no longer relevant, they live on. For instance, the reason our keyboard is laid out into a haphazard alphabet soup can not be attributed to some drunk illiterate. Quite the contrary. In 1875, Christopher Sholes (his peeps called him Mr. Typewriter), ran into a problem with his new invention. The dang keys kept sticking together when a typist worked too quickly. Unable to figure out how to keep the keys from actually sticking, he decided the next best thing was to keep the typist from typing too fast. So he scientifically jumbled up the letters so that that commonest ones were spread apart. These days, jamming typewriter keys are only a problem for people who’ve been sleeping since 1984. But the “QWERTY” style keyboard layout is probably with us forever.

The 40-hour workweek was established with union pressure in the 1930s. Most of America still abides by it today. It’s another one of those “rules.” Work less than 40 hours and you’re a slacker. Work more than 40 hours and you’re either very dedicated or a workaholic (still some debate on this one.) Timothy Ferris questioned the necessity and intelligence of this rule (and ruffled some feathers) in his mega best seller, The 4-Hour Workweek.

I’ve had this post about rules that don’t exist in draft form for so long that mold started growing around the punctuation marks. I grew interested in the topic when Kim and I began our inaugural voyage through The Escape Plan and she nearly made a poor waitress’s head explode. She obliterated the age-old “rule” that you’re not supposed to eat dessert first by ordering chocolate lasagna as a first course at the Olive Garden. Before long, I started to notice all kinds of rules that don’t exist, things we do consciously or subconsciously for reasons that range from irrelevant to superstitious to downright stupid.

Along the way, I’ve been inspired by all sorts of people. People like Melynda at Our Blessed Arrows, who wrote:

We refuse to laugh at silly things, we don’t play tag or wear colorful socks. We focus our time on finding new and better ways to live another year, another week, another day even when the life we are trying to extend is boring. We worry about every morsel that goes into our mouths. Is it organic? Are the proper amount of government institution recommended vitamins in it? Will it cause cancer? Is it processed?

And then there was the always insightful Mark Stevens, who explained why he despises conventional wisdom:

It is not wisdom. It is just convention. And convention often boils down to doing things the way they have always been done simply because they are done that way.

I envisioned a tome I could write that outlined EVERYTHING I could possibly say about rules that don’t exist, complete with a library of examples that would make Wikipedia jealous and run crying home to his mommy. The concept eventually grew so intimidating that it scared the marshmallows out of me and gave me a major case of writer’s block and a rash on my right ear.

“Me write good about rules that no exist.”

Finally, I had the epiphany to create a category of posts, rather than a single, comprehensive, all-encompassing, impossible-to-write post.

So this is the first of what promises to be a series of posts dealing with the rules that don’t exist. I’d love to hear about any that you’ve encountered. Feel free to share yours in the comments section below.

In the meantime, be on guard against anyone who tells you that you can’t eat dessert first, wear pajamas outdoors, that your shoes must match, or that you can’t enjoy peanut butter from a spoon.