Sending a Message to Soda and His Cronies 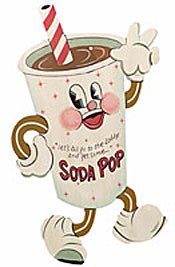 Has this ever happened to you? It’s a dark and stormy night and you’re home alone, nestled into the couch watching old movies. The wind is whipping tree branches against the windows, making an eerie scraping sound. You hear a creak that seems to be out of place, and against your better judgement, decide you’d better get up to investigate.

Suddenly, out of nowhere, a giant, 72-ounce Cherry Coke busts down the door, holds you down, and forces every drip of its syrupy evil down your throat.

Fortunately, this hasn’t happened to me — yet — but I’m looking into a new home security system to protect my family from this sort of soft drink crime that is apparently growing in frequency around the country.

Did you know that Soda and his cronies are causing obesity in this country? Not just in adults, but children, too! Oh, the humanity!

Happily, our friendly neighborhood politicians are on the case. Some are suggesting a penny per ounce tax on the sugar-laden beverages to prevent them from wreaking further havoc.

An interesting start, but I’m not sure if that’s taking the problem seriously enough. Perhaps it should be a dollar-an-ounce tax. Or maybe we can send a strong message by rounding up all of the soft drinks and putting them in a time out, or grounding them for a month.

We need to send a message to these killing machines, but how?

Here are some ideas…

1) Maybe we can tell our nanny-minded government to stay out of our lives and quit trying to get their grubby little hands on all of our money a few cents at a time.

2) Maybe we can write a strongly-worded letter to the Adultitis-ridden do-gooders who are ruining everything that we don’t want to be penalized for someone else’s complete lack of self-control. (If the letter doesn’t work, we’ll threaten wedgies!)

3) Maybe we can actually — gasp! — hold people to a standard of personal accountability and begin operating under the assumption that if you want to slurp down 600-calorie Mountain Dews which may lead to rotting teeth and a sizeable weight gain resulting in an early death, that’s your choice, but not the Mountain Dew’s fault.

But maybe I’m just being ridiculous.