For People Who Need Less Adultitis In Their Lives 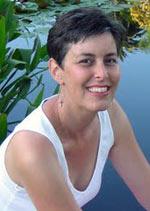 Most people are deathly afraid of speaking in front of a crowd (whether or not the crowd is in their underwear). Lisa Braithwaite is a cool coach and blogger who helps people get better at public speaking. She notes that the fear of looking foolish, the fear of trying new things, and the fear of standing out are all symptoms of Adultitis, which she works hard to alleviate in her clients, as she gives them tools to help their anxiety melt away.

She recently reviewed our new book, There’s An Adult In My Soup and gave away a signed copy on her blog. In the review, she pointed out some of her favorite themes from the book: 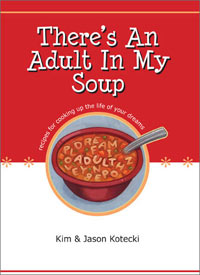 “Busy: The New Four-Letter Word,” is about how adults tend to compete over who’s busiest. The problem is, nobody wins in this competition. It’s all lose-lose. Kim officially makes the word “busy” a bad word. As she says, “The funny thing is that everyone has the same amount of time, so if you are ‘busy’ it’s your own fault. The flaw is in you.”

“FTERA. Do You Have It?” Failure To Enjoy Recent Accomplishments is a new malady discovered by Jason’s father where we do not take time “to delight in the little things and maintain perspective.” (See my blog Yay Life! for more on enjoying the little things.)

FTERA is about always wanting or needing the next thing to come along. We can’t be content to be satisfied with what’s already accomplished; we have to constantly be grasping for the next event/activity/project.

“Stress Begets Stress” Kim says, “I happened upon an article talking about the trend of commuters leaving earlier and earlier, while also leaving work later in the day to avoid traffic, only to find themselves pulling twelve- to thirteen-hour days. Adultitis, much?”

“The lesson here is simple. YOU are in charge of your life. If it’s a stressed-out mess, it’s time to stop blaming your circumstances and start moving towards change.”

When you write a book, it’s always neat to hear what aspects of it managed to grab someone. I found it pretty cool that a lot of the themes that struck Lisa were written by Kim, who often downplays her writing skills. I try my best to pooh-pooh that notion (and also try my best to use the term “pooh-pooh” as much as possible). But, as husbands out there know all too well, our opinions seem to weigh less with each passing year. I’ve always believed that Kim’s contribution added a TON of perspective to the book (and this blog), but I’m grateful to have Lisa back me up on that one.

Pick up your very own copy of “There’s An Adult In My Soup,” filled with short bursts of inspiration, witty and wise life balance advice, and over 50 fun illustrations.