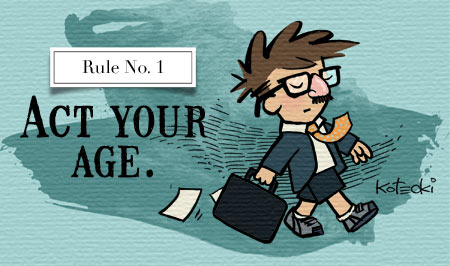 Of all the rules that don’t exist, perhaps the most widespread is the notion that you are supposed to act your age.

I’m guessing that this quip originated from a woman who caught her husband throwing things at the television while watching a football game. Or perhaps a high school teacher who was tired of her students firing spitballs across the classroom.

As with any rule, there usually contains within it a kernel of common sense. In this case, it is, “Quit acting like an idiot, you moron.”

The problem with this rule is that it falls apart the minute you start to follow the logic. I have yet to find the handbook that details exactly how one is supposed to act upon reaching a certain age. For instance, which actions are supposed to be jettisoned when a 34-year-old turns 35? And when I turn 65, am I suddenly supposed to jack my thermostat up to 100º, start eating dinner at 4:00, and commence complaining about how the kids are wearing their pants these days?

Clearly, this rule has some real problems.

Even worse, this particular adage oversteps its bounds and enslaves many people in the chains of Adultitis. In an effort to “act our age,” ANY actions and attitudes that could in any way be considered childish are tossed out like the proverbial baby and his proverbial bathwater. We laugh less, especially not at silly jokes. We’re more stressed, because we focus our attentions exclusively on “serious” matters. Instead of being optimistic, we become “realistic” (which really means pessimistic, although we’d never admit it.)

Because some of the qualitites we are so eager to abandon are the very things that can reward us with the kind of life we so desperately crave. One that is adventurous. Passionate. Meaningful. And fun.

It has been said that the average 4-year-old laughs around 400 times a day. There is some debate over the source and accuracy of this statistic, but any fool could tell you that when it comes to average daily laughs, the chasm between kids and adults is astronomical.

Odds are, a kid laughs around 400 times a day. Your laugh total probably clocks in at less than 20.

What age would you rather act?

If you feel unhappy, tired, stressed-out, bored, unadventurous, or any other negative emotion, try acting in the opposite way.

According to William James, the brilliant psychologist and philosopher, it’s a strategy that’s bound to work:

“Action seems to follow feeling, but really action and feeling go together; and by regulating the action, which is under more direct control of the will, we can indirectly regulate the feeling, which is not.” — William James

From now on, boldly refuse to act your age.

Instead, act more like the person you want to become.