Thou Shalt Color Inside the Lines 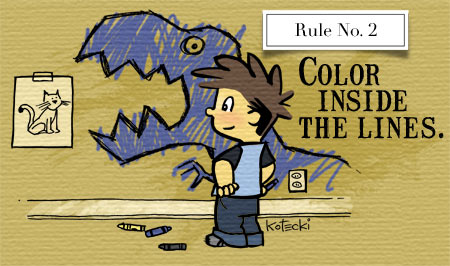 Ever since you were able to hold a crayon, you’ve been instructed to color inside the lines.

If you consistently color inside the lines, you are heaped with praise and judged to be a budding artist with tremendous upswing. The kids who regularly color outside the lines? Well, we’d rather not talk about them.

Once you’ve mastered the art of coloring outside the lines, you need to make sure your color choices are proper as well. Blue for sky and green for trees, that sort of thing.

It’s all a big smokescreen. None of this does anything to solidify your standing as a true artiste. (In fact, it encourages the opposite.) What it really does is teach you how to conform.

When it comes to examples of conformity, look at the cars we drive. In 1909, Henry Ford said, “Any customer can have a car painted any color that he wants so long as it is black.” In 2009 — exactly 100 years later — the two most popular car colors were black and white. (And the next two most popular colors are grey and silver, which are a combination of the first two!) Add in blue and red, and those six colors make up 89% of all cars. “Other” clocks in a less than 1%.

Conformity is a very good thing for governments, corporations and schools. But not so much for you. As adults, the only real reward for being the best at coloring inside the lines is a small measure of security. But it can come at the cost of unfulfilled potential and a boring story.

They colored WAY outside the lines.

God created you to be something special, unlike anyone else who has or will ever live. He wants you to stand out and shine like the stars.

Don’t be afraid to dance when others sit on the sidelines.

Don’t be afraid to zig when others zag.

Don’t be afraid to color outside the lines.