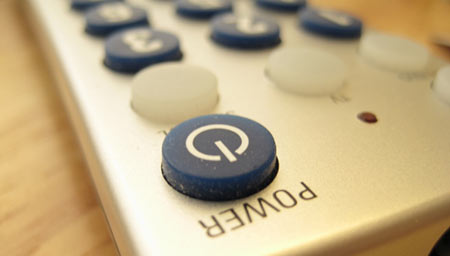 I recently read an article in Fast Company about a married couple who started a Minneapolis-based chain of clothing boutiques for mothers called Hot Mama. The store is aptly named, as it carries more than 200 brands, but no mom jeans or sweatpants. The idea for creating a place where women can get help finding clothes that fit them perfectly while their kids are kept happily entertained by toys, coloring books and video games had been percolating in the mind of Megan Tamte for quite some time.

And then came a small rebellion:

Hot Mama remained just that — an idea — for years as Megan spent her days as a stay-at-home mom. Her “aha” moment came during an episode of American Idol. “I was watching other people make their dreams come true instead of chasing my own,” she says. “I just realized, ‘This is really dumb!’ I don’t watch TV anymore.”

When the average American spends five hours a day watching television, making a conscious decision to turn it off is a small rebellion indeed.

America has long been known as the Land of Opportunity, the place where you can make your dreams come true. And despite our current economic challenges, it still is.

Now I’m not anti-television at all. I have a high-definition big screen that I enjoy very much. But Kim and I are very mindful of how often it’s on, and we’re trying to make it even less. We’ve resisted getting a Tivo because we’re weary of a machine creating a to-do list of shows that we’ll feel obligated to keep up on.

I’m not sure what an ideal number of viewing hours is, but I can’t help but wonder: has anyone who watched several hours of television a day ever accomplished anything great? I just can’t imagine Martin Luther King, Jr. or Steve Jobs or Bill Gates or Mother Theresa or Nelson Mandela or Oprah Winfrey or Walt Disney sitting on their couches watching their favorite shows every day.

That because they didn’t.

And, although she used to, now Megan Tamte doesn’t either.

Important note: although Oprah and Disney have spent a great deal of time ON television, I guarantee you they didn’t spend a whole lot of time WATCHING it.

Because they were too busy making their own dreams come true.

And another interesting thing to consider: because each of the people listed above worked on chasing their own dreams, their success has helped countless others to achieve theirs.

What could you accomplish if you watched less TV? Why, you could:

I know, watching less TV seems like such an overly simplistic, minor and trivial thing to do. But then again, small rebellions always do.

But I am convinced, with respect to the President of the United States and Staples, the most powerful button in the world is the one on your remote control that turns your television…off.