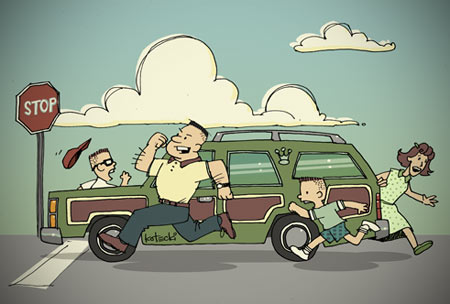 A few weeks ago, while packing up after a speaking program for a high school’s support staff, I had the privilege of chatting with one of the custodians. His name was Frank.

Frank shared with me a story from his childhood, starring his father, a career Marine. The family operated pretty much as you might expect under the head of a someone who’d spent his whole life in the service and saw action in two wars. The kids had buzz cuts. The household was in perfect order. And when Dad spoke, you listened.

One day, during a family drive, Frank’s father came to a stoplight. He abruptly put the car in park and announced, “Alright everybody! It’s time for a fire drill — everybody out of the car!” The rest of the family was temporarily stunned, but what choice did they have? An order was an order! Within moments, they joined the 5-foot-8-inch spark plug outside and did several laps around the parked car. Then he commanded the eldest son, who was only 13 at the time, to get in the front seat and drive.

Well, the son did what he was told, and after a few shaky, herky-jerky blocks, the dad ordered the car to a halt, saying with a chuckle, “You’re right. You can’t drive. I’ll take it from here.”

The family’s shared laughter lasted for miles and miles and years and years. According to Frank, from that day on, his dad was a changed man.

Frank’s father died last February from emphysema. While he was in the hospital, in the middle of his final battle, the old man reflected back on his years. With tears in his eyes, he declared that day to be the happiest day in his life. Not the day he was married. Or the day his kids were born. The day he ordered the Chinese fire drill. The family that was with him on that memorable day was with him as he shared his deathbed reflection. And that night, he passed way.

Not only had Frank’s dad seen war firsthand — with an abundance of wounds to prove it — he also watched his brother die in the attack on Pearl Harbor. At the time of the famous fire drill, his duty to turn boys into men and train them for war weighed heavily on him.

It’s hard for me to imagine the burden he carried and the nightmares that must have perpetually haunted him. But what a testament to the power of a small rebellion! Imagine it with me: a disciplined, serious, strait-laced Marine who one moment is navigating the family station wagon and the next is circling it wildly with reckless abandon, amidst a chorus of silly giggles and hearty chuckles.

Today, there are many people who are being asked to do more with less. Our world is still wracked with war. We hear story after story of people losing their jobs, their homes, their battle with cancer. Perhaps you are among them.

Life isn’t easy. Sometimes it seems too hard to bear. But no matter how hopeless or heavy it seems, hang in there.

You see, as difficult as things can get, I am encouraged and inspired by the fact that sometimes, a tiny action — a decision to zig instead of zag — can be more powerful than corporations, governments, or an army of powerful tanks.

So even if the cause seems lost or a solution out of sight, try instigating a small rebellion. Who knows? A random act of silliness may just turn the tide.

And turn today into the happiest day of your life.