Thou Shalt Wait 30 Minutes to Swim After Eating 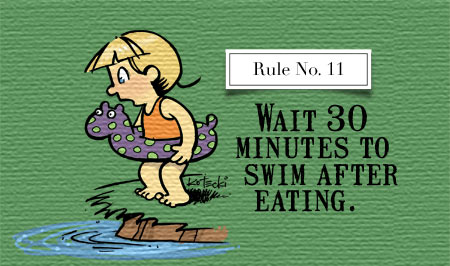 If you jump into a lake or swimming pool immediately after eating, there is a very high probability that you will cramp up and drown or get sucked into the pool filter or get eaten by lake sharks. Or something equally terrible.

According to the American Red Cross and scores of doctors, including and Dr. Charles Smith of the Family and Preventative Medicine Department at UAMS, there is no medical evidence to support this myth. “In reality,” says Dr. Brian Udermann of the University of Wisconsin-LaCrosse, “There has never been a documented case of someone drowning because they had a large meal before they took a dip in a lake or a pool.”

Most rules that don’t exist are with us because they’ve picked up steam. Your mom says it because she heard her mom say it. It’s posted on the sign at the public pool so it must be serious. Most of the time, we follow rules that don’t exist because we’ve always followed them. Instead of following blindly, make a point to stop and ask why. A simple search on the internet solved the case for me in five minutes.

Here’s the truth: When you eat, an increased supply of blood flows to your stomach and intestines to absorb the nutrients, meaning that there is less blood available to deliver oxygen and remove waste from exercising muscles. However, you have more than enough oxygen to do both activities just fine. If you decide you’re going to swim the English Channel or challenge Michael Phelps to a race, you might cramp up a bit. But you’re not gonna drown.

Or get eaten by lake sharks.