Public Displays of Silliness on the Rise 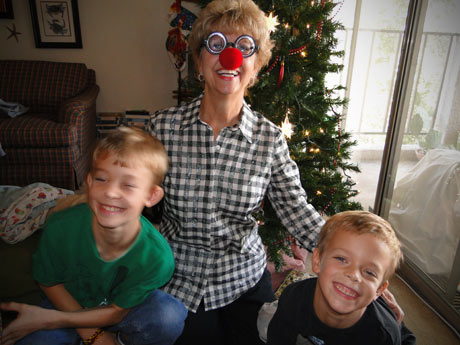 So in last week’s Insider newsletter (you’re getting that, right? If not, hop to it!), I wrote about meeting Ann, a long-time nurse who has been wearing her trademark red clown nose for the better part of 35 years. She not only wears it at the hospital where she works, but at places like the grocery store, too. I urged readers to be more like Ann. Too often, we play it safe for fear of encountering the wrath (and dirty looks) of those with full-blown Adultitis. To be sure, Ann encounters more than her fair share of those types when she’s wearing the red nose. But she also brightens the day of more than her fair share of people as well.

Happily, I received a number of emails in response in which members of K&J Nation shared some of their favorite things to do:

Last Christmas, Cindy (pictured above) had her grandkids over to spend the night, and pulled out a red clown nose from her purse when they went to the grocery store together. At first, the kids thought “Nana” was crazy, but she told them she was giving the gift of laughter and wanted to see how many people would stop, look, and laugh. And many did! (Plus Cindy gave her grandkids a memorable moment they’ll never forget.)

Since going back to school, Steven has been regularly wearing a silly t-shirt. The other day, a lady in the cafeteria told him she looks forward to seeing what he wears each day.

Cassandra has recently started high fiving random people. She raises her hand with a smile and says, “Hey, can I get a high five?” She reports that most strangers will do this, and many of them with a confused, though pleasant smile.

Salina, a fourteen year old bundle of awesome had to do a presentation on a Greek goddess and made her own costume. Instead of bringing it to school and changing there, she decided to wear it to school instead. According to Salina, she got nothing but smiles on her way there — no dirty looks or blank stares straight ahead.

The truth is that the world is aching for a teeny bit of silliness. But they need permission, because the Adultitis-ridden fuddy duddies have been in charge for way too long!

But wouldn’t the world be way more fun if that was the norm?

We could use your help!