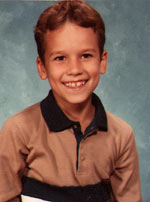 When I was in third grade, my teacher asked me to draw a picture of Santa Claus for the school newsletter. I distinctly remember Mrs. Smith saying that I was the perfect man for the job because I could draw him better than her.

I don’t remember a lot of things about third grade, but I remember how that compliment made me feel.

I tell that story from time to time, mostly with the aim of stressing to teachers the importance of encouraging their students when they see them doing something great. I readily admit that Mrs. Smith very well could have been feeding me a line of B.S. when it came to comparing our artistic skills, but the point is that she was sincere, and she made me believe it. That moment stands out as the first time I was really made to believe had a gift when it came to art. I owned it, and I never looked back.

She always told me that I’d be a “famous” artist someday Luckily, I didn’t know then that most artists don’t become famous until they die.

Well, I was cleaning out a closet the other day and came across a box of mementos from my childhood. Among the finds was a stack of school newsletters, including Peru Catholic School newsletter, circa 1984. Inside was the most horrifying, God-awful illustration of Santa ever put to paper. I refuse to believe it’s the work of my hands, even though I happened to be in third grade in 1984. Yes, the initials “JK” are lightly drawn in the bottom right corner of the artwork (not lightly enough!), but I still can’t bring myself to claim the work as my own. Granted, all the other names around the drawing are fellow classmates and there wasn’t another “JK” in third grade that year, but I’ll stick to the theory that in this case, “JK” stands for just kidding.

Ok, ok, I’ll admit this: the suspicion that Mrs. Smith was giving me a line of B.S is very VERY likely.

Looking back, I’m not sure what she saw in me. Perhaps, compared to the other third graders, the drawing isn’t half-bad. Or maybe our class had unusually low artistic aptitude, causing me to really stand out. In the end, none of that matters.

The talent was there all along. But without hard work, talent just becomes unfulfilled potential. And without some encouragement from time to time, it’s awfully hard to buy in to doing the work required to hone that talent into something remarkable.

Mrs. Smith passed away from cancer before I ever had a chance to thank her for what he did that day. It’s likely she wouldn’t have even remembered it.

But a small gesture to you might be a big honking deal to someone else.

Whether you’re a teacher, a manager or a parent, if you catch somebody’s light shining, tell them you see it and that you appreciate it. When you encourage others — and really mean it — you have no idea what kind of impact you just might make.

In the case of Mrs. Smith, she provided the fuel to ensure that someone wouldn’t be drawing bad Santas forever.