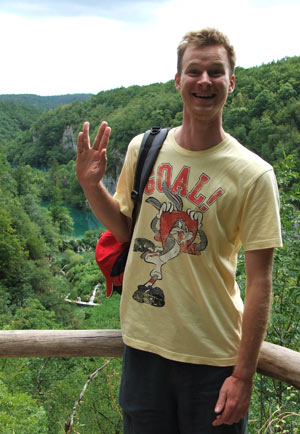 • My hometown is… Bratislava /Slovakia.

• My biggest dream…is to have a muscle car – Chevy or Ford.

• My inspiration… is my girlfriend and her dreams.

• When I was a kid, I…wanted to be a scuba diver and I was trying to make oxygen tanks from plactic bottles from vinegar.

• My favorite childhood toy was…anything I could find before my parents gave it to me. That was before Xmas or Birthday. In other instances I messed around with tools: screwdrivers, hammers, knives or axes. Oh! And matches! FYI: I have all fingers in place as you can see on the picture above :-)

• One way I stay childlike is…I take my bike out in heavy rain and I come back soaked and dirty just like when I was kid.

• My favorite things about “Kim & Jason” is… I feel that they do what they believe is the right thing to do. They make me think about little things which make a difference. Thanks guys!