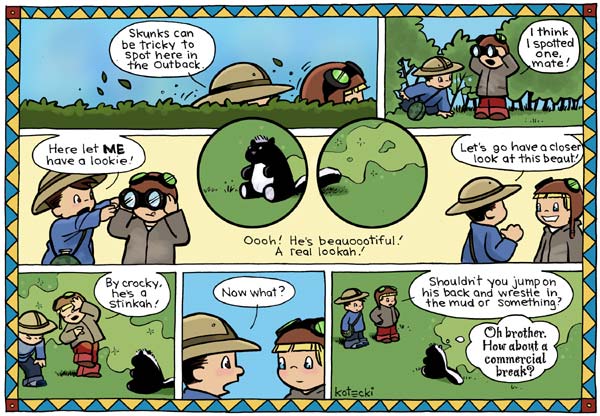 I often wonder why I care so much about what other people think.

I shouldn’t, and I like to think I don’t, but I do. Not always, but more often than I should.

The irony is that the worst-case scenario is always the most terrifying when it stays in our head. If we were to actually speak our fears out loud — to shine light upon them — we would realize how ridiculous it is that we allow them to enslave us.

When Kim and I wrote The Escape Plan, we identified this unfortunate but all-too-common trait that keeps us tied down and hastens the spread of Adultitis. And so we wanted to include a challenge to address it. We called it, “G’Day Mate,” and it was simple: Talk in a phony voice or accent to a complete stranger.

Simple, but not easy.

This is a challenge sure to measure exactly how much you care about what other people think. For some of us, the idea alone scares the snot out of us. (It did for me.) And yet it is a perfect example of how the fear in our heads is more terrifying than the reality. Because what are we afraid of? That the person might think we’re weird? Recognize our accent as a fake? Laugh at us? At the risk of stating the obvious: WHO CARES?! It’s a stranger! One we’ll likely never see again.

I’ll admit, when I did this the first time, I tried taking the easy way out. I went through the drive-thru at McDonald’s and ordered a few cheeseburgers in my best English accent, which was still very, very bad. I thought I’d avoid a face-to-face interaction, completely forgetting that the ordering part of the process leads to the order receiving part of the process, which of course, is done face-to-face.

“Do you want any ketchup or extra napkins, sir?”

I stumbled through the rest of our interchange while wondering if the McDonald’s employee called me sir because she assumed I was a knight. Meanwhile, Kim tried desperately to muffle her boisterous laughter.

Afterwards, Kim and I both erupted like school girls. An enormous weight was lifted off my shoulders. I had done something I was afraid to do and came out unscathed!

Which is, of course, usually what happens when we do something we are afraid of. When we allow ourselves to be vulnerable. When we are able to let go of worrying about what others think of us. Not only do we come out unscathed, but we come out stronger. Braver. Freer.

One such action does not always cure us forever. But consistent practice can grow our comfort zones larger and larger, until we come to a place in which we give no thought to attempting something that would have paralyzed us with fear just a year or two earlier. Children could care less what other people think of them — have you seen the way they dance or dress themselves? — but we adults need to practice in order to return to those carefree days, before Adultitis took over.

I can speak from experience; “G’Day Mate” is a great place to start. I’d love to hear how it goes for you.