How My Dad Told Us He Had Cancer

Minutes after a speaking program in northern Wisconsin, I got a call from Kim, telling me that my Dad wanted to arrange an urgent family meeting for the next day. We wondered aloud about the true importance of this meeting (my Dad has a bit of a history of overhyping things), especially since the day of the proposed meeting was the only one in which I’d be home in the span of a week. That free day was gold.

A call back to my Dad confirmed that the situation was serious, and he was adamant that he did not want to tell us about it by phone.

And so began a 24-hour waiting period in which the only thing to do was entertain worst-case scenarios and pray that somehow, things would work out. To me, the worst case was that one of my parents was found to have cancer and had just weeks to live. I desperately hoped it was something else, like that my Dad had lost his job, but I knew even that would never warrant a response such as this. I spent the rest of the evening trying to get my mind off of it. When my thoughts did drift back to the gravity of the situation, it felt as if it were all a bad dream. Reality reminded me that it was not.

Suddenly I could relate to anyone who has ever had to wait for a diagnosis. No matter how dire the news, there is a certain peace in at least knowing what you’re dealing with. But the waiting and the not knowing, that’s the hardest part.

The next day my brothers and our wives convened at the home of my youngest brother. While waiting for my parents to arrive, we ate some pumpkin desserts my sister-in-law had whipped up, as if the sweetness would somehow counteract the sour news we all feared we were about to hear.

Eventually, my parent’s car pulled into the driveway. My mom looked like she was wearing a white sweatshirt with the hood pulled over her head. This did not look good, and seemed to confirm our suspicions that this terrible news was centered around her.

We were all confused as could be, but still secretly wishing that perhaps this ridiculousness was a sign that the news was not as bad as we feared and this was just “Dad being Dad.”

We all exchanged hugs and it seemed like my parents were in good spirits. I wanted to exhale, assured that my worst fears were just the by-product of an overactive imagination. I glanced at the uncertain smiles on the faces of my family members and hoped that we’d soon be pleasantly surprised with positive news that we never saw coming.

But those hopes faded as my Dad set up a makeshift podium in the living room and pulled out a homemade sign made on loose-leaf paper that he taped to the front. It read “Stuff Happens.” Below that was a smiley face next to a frowny face. The frowny face had an “x” through it. Any hope there was quickly evaporated from the room. It became hard to breathe. We all braced for the worst.

All eyes were fixed on my Dad, who started things off by telling us about tough challenges that we’ve faced over the years and reminded us of how we got through them as a family. On and on he went, testing the patience of his children and his wife, who was sitting in a chair on the opposite side of the room.

At first, my heart plummeted into my stomach. But as he explained the kind of cancer he had (prostate), and shared that they had caught it so early, and told us how high the survival rate was, hope slowly returned. He said that he and Mom had resolved to be positive and optimistic, which is why they decided to lighten the mood by coming dressed in the Halloween costumes they had worn at a party the night before. “We hoped it would take a little of the sting out of the news we had to share,” he quipped. 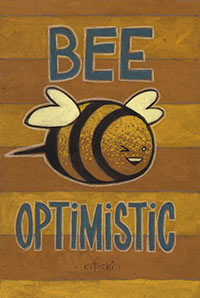 We eventually learned that my parents had worn the costumes for the entire two-hour drive up to Wisconsin, a trip that included a stop to pump gas as well as a run through the Burger King drive-thru.

As the mood lightened and we followed my parents’ optimistic lead, all I could think about was, “I bet no one in the history of the world has ever told his family that he had cancer while wearing a bee costume.”

But that’s exactly what my Dad did.

In the meantime, my Dad is being taken care of by the amazing people at the Cancer Treatment Center of America. Amazingly, their spirit of optimism seems to match my Dad’s. Subsequent tests have shown that the cancer has not spread to any other areas, and treatment plans are being discussed. The prognosis is still very good.

I feel enormously blessed. Not only because the news is nowhere near as bad as I’d feared, but mostly because of the positive attitude shared by my parents. It is a lesson we all can learn from, and a model I hope to emulate. In the long run, I know this will only make our family stronger.

How can I be so sure?

A little bee told me.