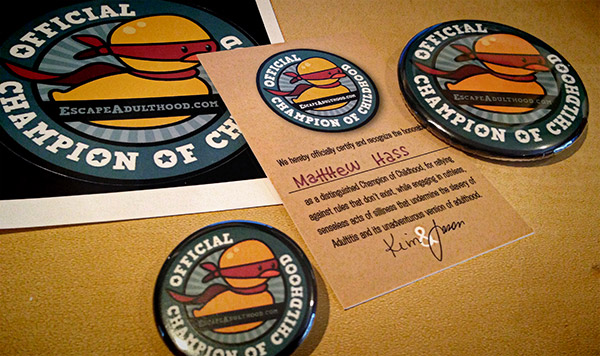 A few years ago, a TV reporter referred to me as “The Champion of Childhood.” Although I never received a jewel-encrusted crown or an oversized gold-plated belt, it’s a title I wear proudly. Admittedly, I don’t actually consider myself “THE” Champion, but rather “A” Champion of Childhood. There are scores of people infinitely more qualified than me in this arena, but I quite fancy the idea of acting as “a militant supporter and defender” of the ideals of childhood.

Ultimately, I like being a verb more than a noun.

Kim and I love using the platform we have to highlight the brilliant people who inspire us. The everyday folks who should also be considered Champions of Childhood. Recently, we decided to make this designation official. (In the same way a secret handshake required to gain entry into a treehouse is official.)

So I created a logo, and we made buttons and stickers and magnets and certification cards to bestow upon people we deem Champions of Childhood. (Because there is nothing more fun than making up an award and giving out prizes.)

Officially, a Champion of Childhood is someone instilled with the soaring spirit of childhood who rallies against rules that don’t exist while engaging in ruthless, senseless acts of silliness that undermine the slavery of Adultitis and its unadventurous version of adulthood.

In short, they are Rock Stars of Childlike Awesomeness.

Now, it’s likely that the majority of people who regularly visit this site are such champions. But from this day forth, we shall be shining a light upon the most remarkable among us, holding them up as a dazzling example of what we should strive for in this epic battle against Adultitis.

Our first designee (quite possibly the first and last time the word “designee” will be used on this blog) is Matt Haas from the great state of Maine. He recently sent me an email with the subject line: “Adultitis Almost Won.” Here is the bulk of his message: 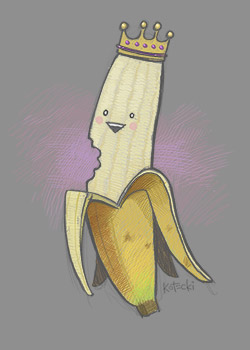 Last night after dinner, I decided to have a banana for dessert. As expected, my 4-year-old daughter sitting next to me got a sudden urge to also consume said banana. Being the good parent, I granted her non-verbal request (I.E. gaping open mouth) and held the banana towards her.

As she hovered — about to take the first bite of no doubt many — I realized she was not approaching the fruit properly! Instead of biting the top off, she was heading towards the side of the banana! I was shocked and in that instance I almost pulled it away from her, but then the child in me overcame my Adultitist reaction and I let her proceed. And yes it was true: she took one, then another, and a third bite — eating the banana sideways!

It was the most outrageous, original and hilarious thing I had seen all day. Her beaver-like attack did result in the banana being severed in two, one half falling into my hand, as the two of us laughed hysterically and ending our day the way everyday should end — with a smile.

While some may wonder what was so remarkable about Matt’s actions, allow me to remind the unimpressed of something important: Acknowledging Adultitis’ stealth moves and consciously sidestepping them like Bruce Lee deftly avoiding an invisible ninja is MUCH harder than it looks. Most of the time we blindly slide into the default responses of our parents, teachers or societal expectations (That’s not how you eat a banana!) while missing out on a chance to live a better story.

In our fight against Adultitis, we must first acknowledge its presence and then make the (often uncomfortable) choice of taking action against it.

Way to go, Matt — you are a true Champion of Childhood! (Bonus points for coining the term “Adultitist!”)