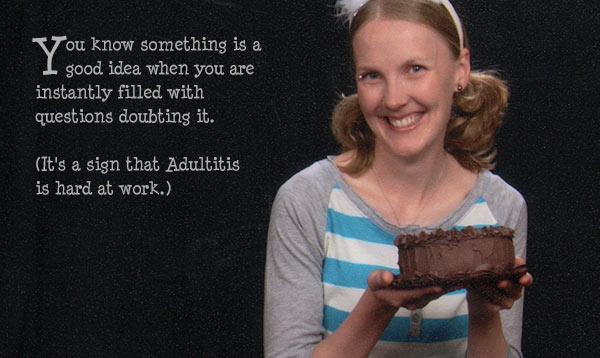 Birthdays come with a a lot of pressure! Everyone — including myself — hopes that it’s a GREAT day.

Some years this greatness is easier to achieve than others. Last year was a breeze. We played hooky as a family, savoring the early spring weather at the zoo. It was a VERY awesome day!

But this year (my 35th) was shaping up to be a real challenge. Jason was in the middle of a VERY busy run: six gigs in four different states in ten days. On my birthday, he was in San Antonio — bummer! I was also at the end of a cold that had been lingering for ten days, Ben’s teething was leaving me exhausted with a consistent run of middle of the night wake-ups, and I was on day five of an outbreak of some mysterious and annoyingly itchy hives.

Adultitis is right in the thick of this daily junk! It’s the troublesome new sound in the car, the annoying arrival of moles in your front yard, and the utility room light switch that suddenly stops working, leaving you to do the laundry in the dark. This is the “stuff” of Adultitis and most days, for most people, it wins.

To be honest, it looked as though Adultitis was going to win my birthday this year, and I was getting increasingly ticked off thinking about it.

So ticked, in fact, that I found myself wide awake at 4 a.m. I began checking email on my phone to pass the time (bad habit, I know). I was touched to find Jason’s VERY thoughtful and fun email that went out challenging everyone to do something fun to help me celebrate my birthday. Hmmm. What was I going to do to celebrate? My brainstorming ranged from lame to lamer to outright unrealistic…but I was trying, amidst the frustrating self-pressure.

As the day progressed, the comments and emails started pouring in, including a note from my parents telling me that they had ice cream for breakfast! It was AWESOME and overwhelming to read what everyone was doing. One woman even laid in a parking lot and rolled around, just to be silly. Another person wore mis-matched shoes. I was touched, and yet, I was feeling even more frustrated that my own birthday was turning out to be so boring. My obstacles were bumming me out BIG TIME: no husband, no car, cold weather. Adultitis was winning and I knew it. UGH!

Then, a combination of things came together. A perfect storm of epic happiness shook me out of the trenches.

Jenna came in with the most unbelievably yummy brownies. Our neighbors and dear friends came by with flowers and a card that said, “Do something today that makes people take out their camera phones.” Hmmm…a hint. Then (to my compete delight) Jason Face-timed me from the River Walk with the unbelievable surprise of being serenaded by a mariachi band singing Happy Birthday. Instant tears!! Then the doorbell rang and there were more flowers (this time from Jason). It was a bouquet of daisies and roses, my favorite combination! This day was starting to really turn around.

And it was just beginning!

I got a text that changed the course of events pretty quickly. My sister-in-law and partner-in-crime/BFF, Connie, got wind of the fact that Jason was in Texas and texted to ask what my dinner plans were. When I replied back “leftovers,” she insisted that she and my niece Kerrigan would be driving up (90 minutes each way on a school night!) to take me and the kiddos out.

I was giddy and speechless and in tears. Her thoughtfulness was overwhelming. I was ready for some memory-making fun!

[Backstory: A few weeks ago I had a funny image pop in my head that I couldn’t shake. Wouldn’t it be funny if a grown-up got pictures taken for their birthday (like little kids often do) with the big numbers of their birthday year? It would be reminiscent of the senior pictures where the subject is leaning up against the giant numbers representing the year of graduation. The idea of this made me laugh out loud and was something I thought would be totally silly and Adultitis-free!]

The following “what if” popped into my head: “What if we all went to get my pictures taken tonight?!” (Mind you, it was like 3PM at that moment.) Would any studio have an opening? Would the portrait people even DO that? Would I really have the guts to go through with this crazy idea?

Side note: You know something is a good idea when you are instantly filled with questions doubting it. (It’s a sign that Adultitis is hard at work.)

A handful of calls later, I was able to get the LAST slot of the day at JCPenny Portrait Studio. Brandon, the photographer, sounded curious and up for the playful challenge of my request. I was a bit disappointed when he told me that they didn’t have the BIG numbers (WHAT?! That was the WHOLE point!), but he reassured me that he had some other ideas that would be JUST as fun. I was convinced.

Four hours later, we were eating pretzels at the mall giggling like school girls recalling all of the fun that had just happened. Brandon was amazing! His playful spirit was another unexpected birthday gift that was icing on the cake. And what a fun experience to share with Connie and the kids.

So, a long set-up, I know. Thanks for patiently reading.

I present to you, my 35-year-old pictures. 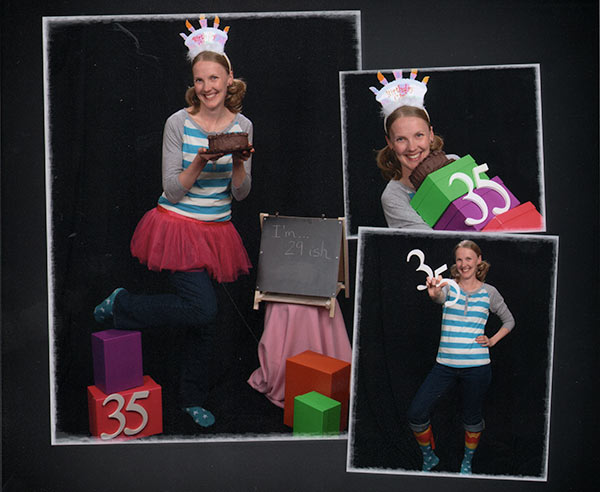 Silly, fun and filled with memories of my BIG birthday comeback story.