The Title of Dad 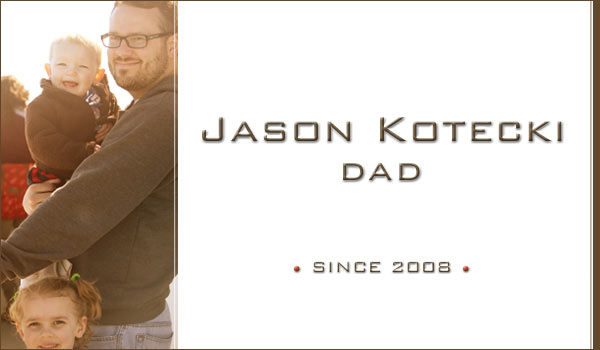 When Kim was pregnant with our first, I had a speaking engagement in Green Bay. After my talk was over, a guy came up to me and said, “Of all the titles I’ve ever had, ‘Dad’ is my all-time favorite. I think it will be the same for you, too.”

He shared that he had two kids, 22 and 19. He said he started missing his younger son the day the boy left for college.

I’ve had a lot of jobs over the years. Baseball scorekeeper. Concession stand owner. Car washer. Newspaper ad designer. Most of us go through our careers with business cards that grow ever more impressive. What makes them more impressive? The titles, of course. “CEO” looks better than “Manager” which looks better than “Sales Associate.” We put a lot of stock in these titles printed on our business card or on the company web site. It is our identity; a sign of where we stand in the pecking order.

Of course, we’re more than just what’s printed on our business cards. We’re sons, daughters, husbands, wives, fathers, and mothers. But those don’t seem much like titles. They’re sort of automatic. We don’t have to earn them by going to school, working hard, or kissing butt.

But it’s probably the most important title I’ve ever had. There’s a lot at stake. I mean, you can win or lose millions of dollars as the CEO of a publicly-traded company, but as the recent economic meltdown has shown us, money is fleeting. If you mess things up, there’s always a chance to rebuild. In the grand scheme of things, most of the decisions we can make in business are not that big a deal.

But make mistakes in the role of fatherhood, and there are real consequences. Do a good job, and the entire world is better for it. I don’t think it’s outrageous to say that if more fathers held the title of Dad in higher esteem, there would be less single moms, our schools would be more successful, our jails would be less full, and our society would have a lot fewer problems.

That’s my focus — being present — because my perfection ship has long since sailed away. I’m delighted to share that even more practice is in my future, as we recently found out that Kim is pregnant with our third child.

(A little present to those of you who read to the end ;)

Happy Father’s Day to all the dads out there, especially the ones who consider “Dad” their all-time favorite title.