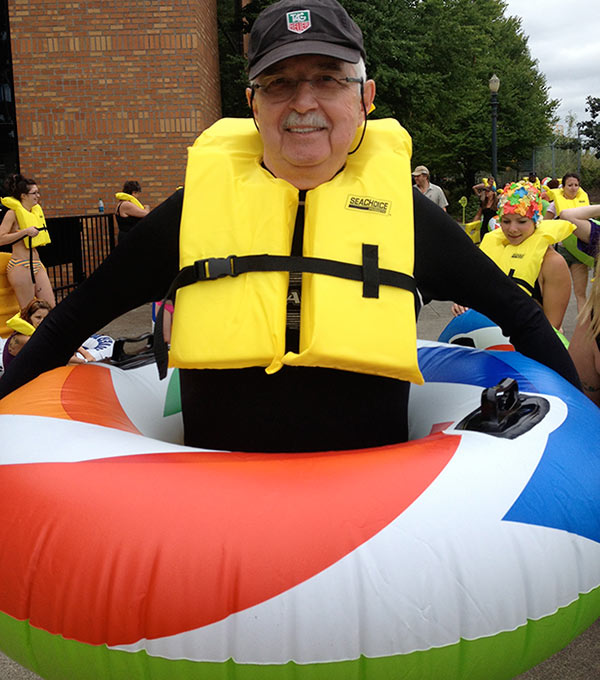 The Small Rebellion is a playful group of escape artists who share a joyful, indomitable childlike spirit and are not afraid to let that spirit come out to play! They’re united by a common goal of fighting Adultitis and the doo-doo heads who embrace its ideals. Quite frankly, they’re pretty much the coolest people on the planet. Here’s one right now…

• My name is… Michael Cavitt (seen above jumping in with 261 of my closest friends to set a Guinness World Record on July 5, 2013.)

• My hometown is… Pittsburg, KS living in Minneapolis, MN

• My biggest dream…live overseas and tutor English so that I can discover other cultures and people.

• My inspiration…spiritual teachings from the Tao Te Ching to Writings of the Baha’i Faith. I try to remember I am a child of God and God promised Abraham we would not be left without guidance. I look for that every day.

• When I was a kid, I…as a 9 year old, rode a train from New Orleans to Pittsburg, KS to spend the Summer with an Uncle and Aunt. I returned on the train as well at the end of Summer.

• My favorite childhood toy was…playing cards. We moved so often I didn’t have a toy that stayed with me for long.

• One way I stay childlike is…follow my promptings. See picture.

• What I know so far…there is only now; so that, I continually strive to stay in the present. Don’t do it well but I understand and try.

• My favorite things about “Kim & Jason” is…recognizing either something I did or something my daughter did as a child. Sometimes things I’ve done as an adult.

We saved a space just for YOU in The Small Rebellion — join the tribe of rule-breakers and sign up to become a K&J Insider today!