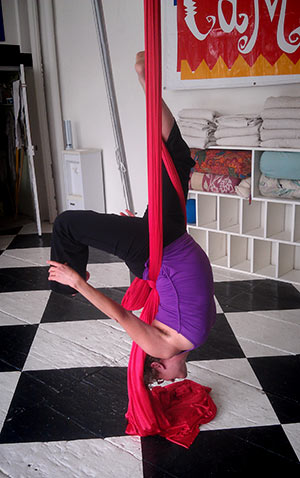 The Small Rebellion is a playful group of escape artists who share a joyful, indomitable childlike spirit and are not afraid to let that spirit come out to play! They’re united by a common goal of fighting Adultitis and the doo-doo heads who embrace its ideals. Quite frankly, they’re pretty much the coolest people on the planet. Here’s one right now…

• My biggest dream…Being fully alive and present whatever I’m doing! And being famous!

• My inspiration…Any chance to use my creativity to express an idea in a new way.

• When I was a kid, I…never stopped talking! And I won the New Jersey State Gymnastics Championship in my class of competition when I was 12!

• My favorite childhood toy was…a little over where I could bake real cakes! It was pink!

• One way I stay childlike is…Spending as much time as possible upside down.

• What I know so far…is how little I know, even though I think I know a lot. And that jumping up and down is fun!

We saved a space just for YOU in The Small Rebellion — join the tribe of rule-breakers and sign up to become an Escape Adulthood Insider today!