Traveling with Kids: How to Not Get Conquered by Disney World 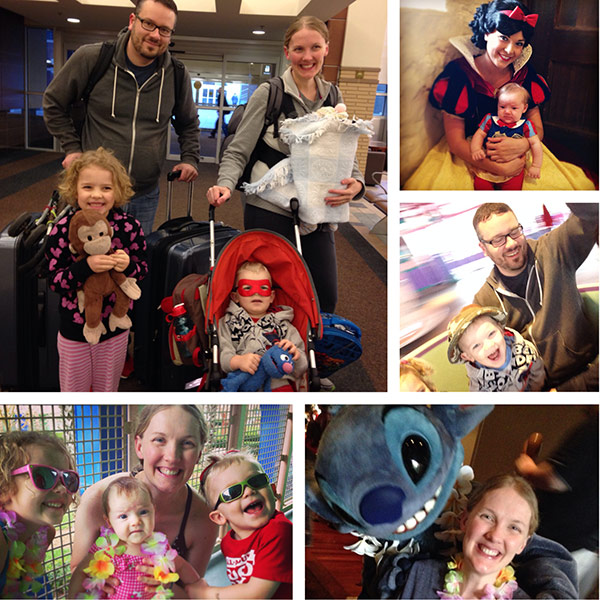 “Disney World is going to conquer you.”

Those were the words a “friendly” TSA employee working the airport security line delivered to Kim.

First of all, who feels it’s a good idea to predict a disaster to someone on their first day of vacation, the one their five-year-old has been counting down for over 80 days? Granted, Kim was holding a two-month old, jamming a half-folded stroller into the x-ray machine, and prepping four bottles of breast milk for a some guy with blue gloves to make sure they weren’t laced with explosive material.

And second, what if Little Miss Sunshine had known that Kim would also be pumping several times at the park itself?

What she didn’t know, of course, was that it would be our fourth time there since our honeymoon. We’ve now done it twice with a two-month-old. (Ben’s first ride was It’s a Small World; Virginia’s was Under the Sea.) Many people think of going to Disney World with small children is a death sentence. And it could be if you do it wrong. Here’s a few things we learned along the way:

Don’t Go in the Summer.
It’s pretty busy all the time, but it’s hell in the summer. Literally. Temperatures reach 130 degrees and Satan replaces Mickey Mouse in all the parades.

Plan Ahead.
Bringing water bottles, sunscreen, and extra baby wipes are all obvious tips. But think ahead to the worst that can happen and look for ways to avoid them or alleviate the pain if they do. Kim earned MVP of the trip by backing 10 “Blowout Kits.” (Paper towels to lay the kid down on! More paper-towels pre-sprayed with stain remover! Wal-Mart bags for the dirty clothes and diapers!) Ginny is at the stage where diapers are simply no match for the volumous explosions that erupt from her nether regions. She had three blowouts at one day of Epcot alone. Not fun to clean up, to be sure, but because of a little forethought, they weren’t disastrous, either.

Don’t Try Doing Everything.
Disney costs a lot of money, but you don’t have to treat it like an all-you-can-eat buffet. Getting your money’s worth by cramming as many things into each day as possible is a wonderful way to get conquered. Prizes are not awarded to the people with the highest attractions per hour average.

Take Naps.
If you plan on spending most of the day at a park, it’s wise to budget in a time for naps. Even the grown-ups appreciate it. Sure, we “miss out” on a few hours of time when we could have been at the park, but it allows us to enjoy the time we are there SO MUCH MORE. This cannot be overstated.

Take Your Time.
Things take a little longer with kids. You can either fight reality and spend your whole trip trying to speed them up (not gonna happen, by the way) or you can slow down to their level and breathe a little. Magically, enjoying the moment becomes a whole lot easier, especially when you begin noticing all the other people frantically running around like headless chickens.

Know Why You’re Going.
Kim and I have been to Disney World without kids, and yes, it is quieter and less stressful. But these days, I’d have a hard time going without them, because I’d spend the whole time thinking, “Man, I wish Lucy could have seen that,” or “Ben would have just loved this.” Some people think it’s stupid to spend all that money going with young children because they’ll never remember any of it. I resent that thought because it assumes it’s all about the kid. Ben may not remember meeting his hero, but I will never forget the stunned, sunglasses-wearing little boy who stood before Mulan speechless when his time finally did come. Lucy may not remember the details of meeting all the princesses at breakfast, but Kim and I will never forget the sparkle in her eye as each one of them grabbed her by the hand and took the time to talk to her. When we take the kids to Disney World, it’s just as much for us as it is for them.

So…Disney World did not in fact conquer us — just as we knew it wouldn’t — mostly because we did the things explained above.

But there is a bigger moral to this story.

Some people get a kick out of forecasting your story for you, whether they’re parents, teachers, or TSA employees. Never forget: this is YOUR story; you get to decide how it’s going to go.

Do you have any good tips for traveling with kids? Share them below!