Behind The Scenes: Studio Tour 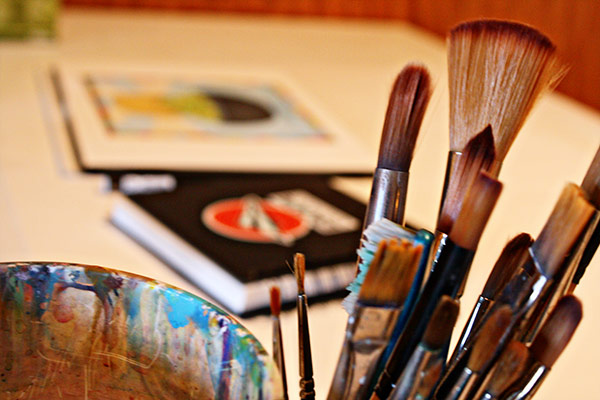 When Kim was little and in Catholic school, she was one of two children who were selected to answer a question from a priest during an all-school mass. The answer would be recorded for posterity in the city newspaper. The priest asked them, “If you could change anything in the world, what would it be?”

In front of hundreds of students and parents, including her own, Kim confidently declared that she would change her room around.

She was quickly upstaged by the jerky classmate who wished that no one in the world would be sick anymore.

Kim immediately regretted her answer. But it was honest one, for changing her room around was one of her favorite pasttimes. After being married for almost 14 years, I think she may be rubbing off on me.

I have changed the color of my studio four times now since we moved in four years ago. It was originally white. I decided I wanted to go bold, so I went with one of my favorite colors: royal blue. The first shade I tried was too green, and it was a hideous nightmare. Before the paint was dry, I was on my way to the hardware store for a more suitable hue. It was better, but not by much. After a few weeks living in this blue period, I confirmed that although a lovely color, I didn’t want to be enveloped in it.

As embarrassing as it was, I had to change it again.

After a lot of thinking, I hypothesized that I wanted to create a cozy cocoon. I turned to Barnes & Noble as inspiration, because I always feel cozy there. It’s where I’d do some of my best thinking. So I painted my studio a dark, grayish green.

Until a few weeks ago.

A few things converged. First, I was starting to feel overwhelmed and suffocated by my space. (Here is a panoramic shot of the studio before.)

Now, many of these pipe dreams are still in the pipe. But after a bit of sulking, I decided to change the things I could. I spent several days de-cluttering. I opened the window shades all the way to allow in as much natural light as possible. And I painted the walls yet again, this time with a very light warm grey.

Here is the final result: 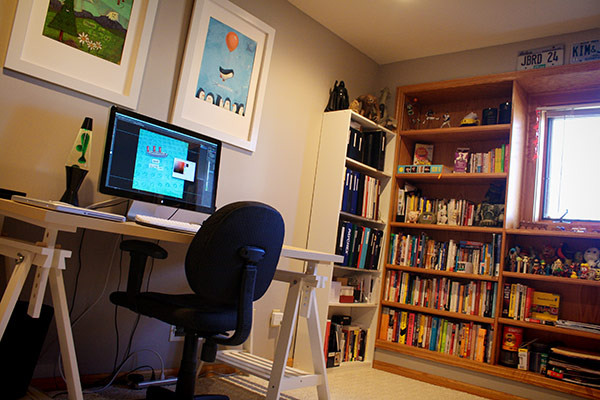 I love it. The uncluttering has given me room to breathe. And the new color increases the overall brightness, makes the room seem bigger, and makes my toys and artwork pop even more. 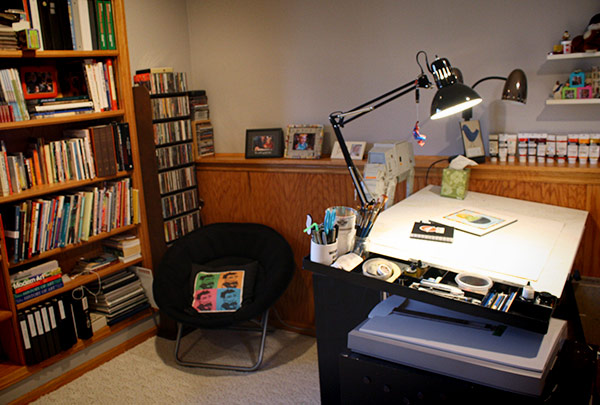 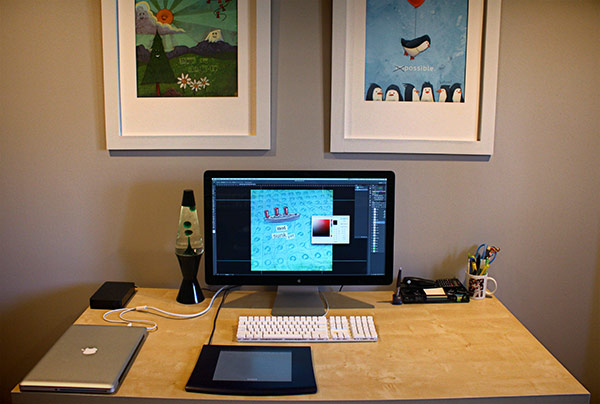 So far I am in love.

Perhaps I’ve finally settled on something that will suit me just fine until the dream studio becomes a reality. 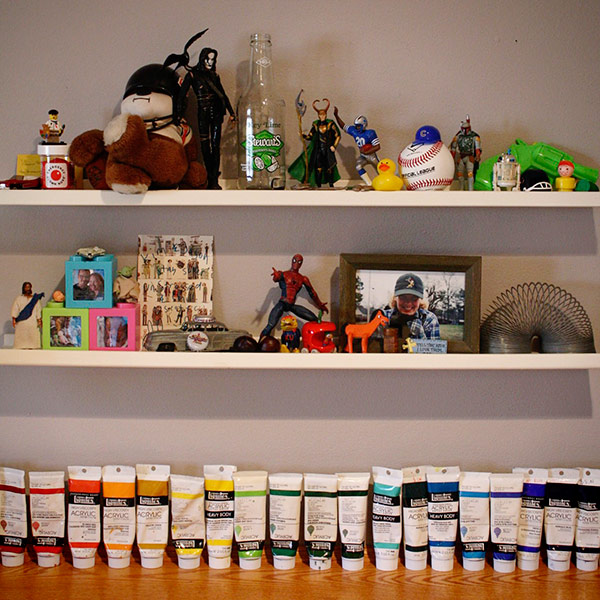 A few of my favorite things. 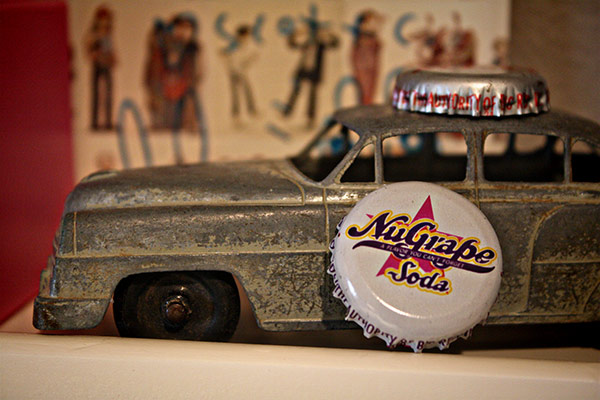 I am such a sucker for art supplies arranged by color. 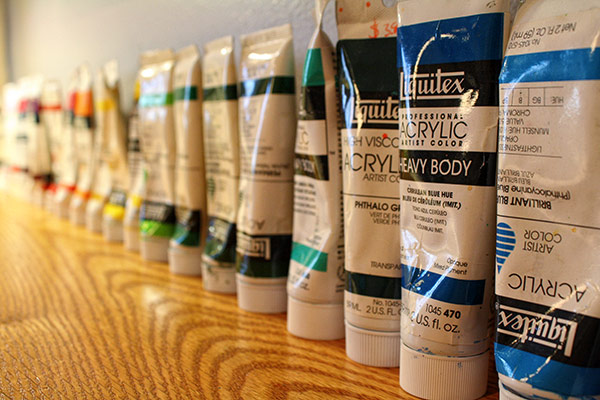 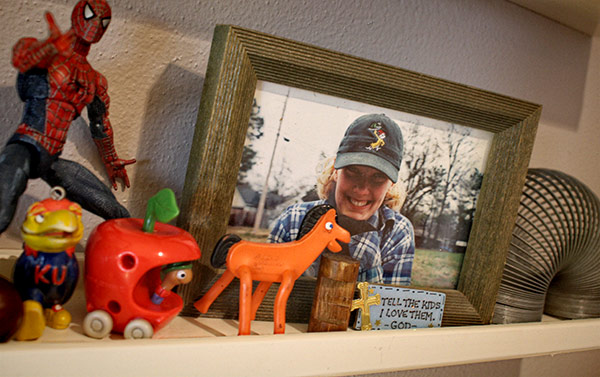 An AT-AT stalks my art table. Any suspicions that I am a complete nerd should be confirmed by now. 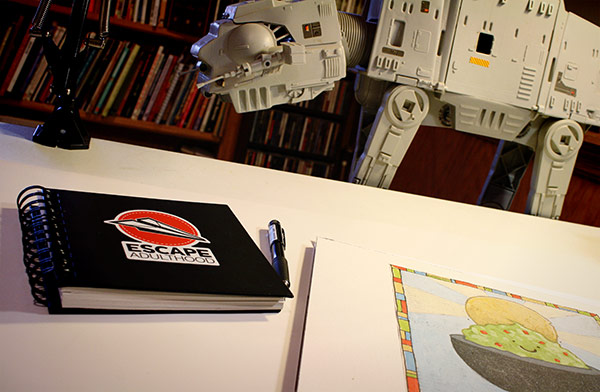 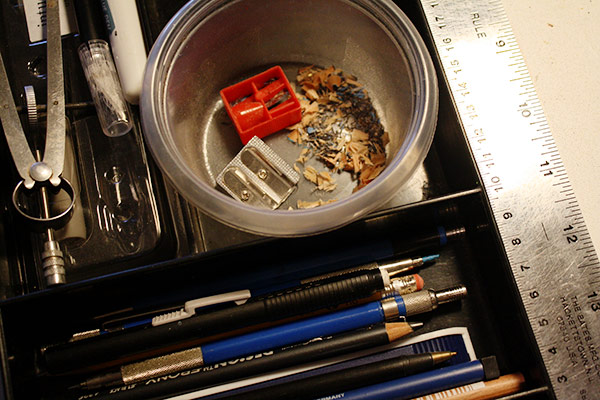 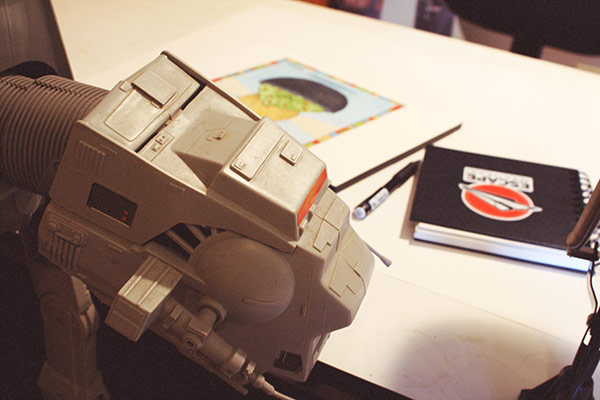 Some people think it’s fun to examine other people’s bookshelves. If that floats your boat, have at it. 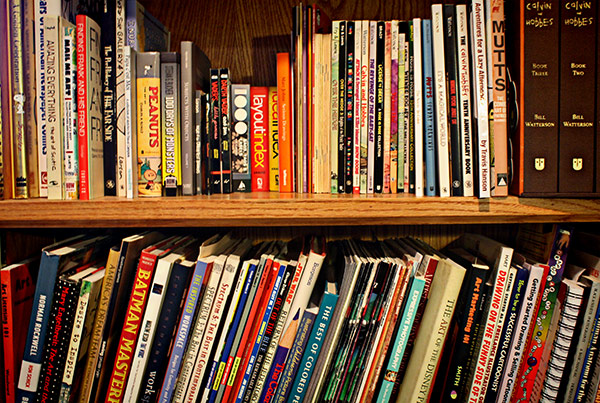 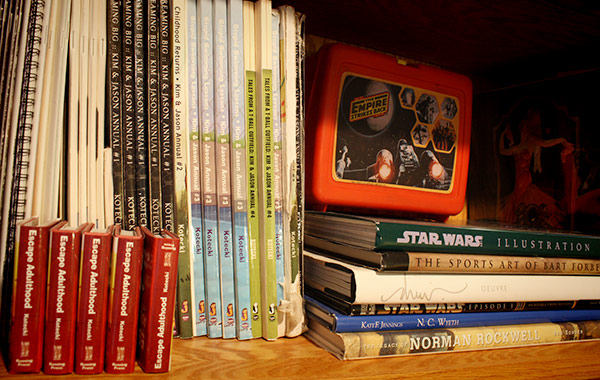 A small collection of license plates above my window. A fan sent me the New Hampshire one a few years back. She was a Kim and had just broken up with her Jason. I love New Hamphire’s state motto. The others are from when we lived in Illinois. 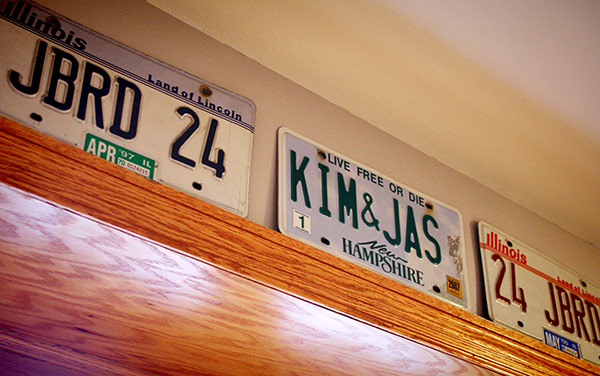 My Mom is a big fan of Precious Moments. These two are mine, and they hold special meaning for me. The one on the left is titled, “Onward Christian Soldier,” and the other one is “Wait Patiently on the Lord.” They provided lots of encouragement over the years, especially during the lean times. 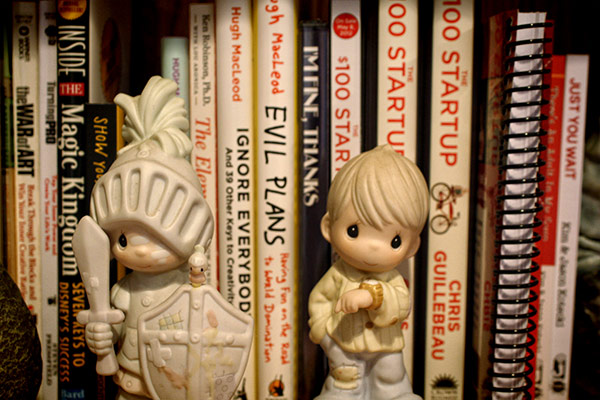 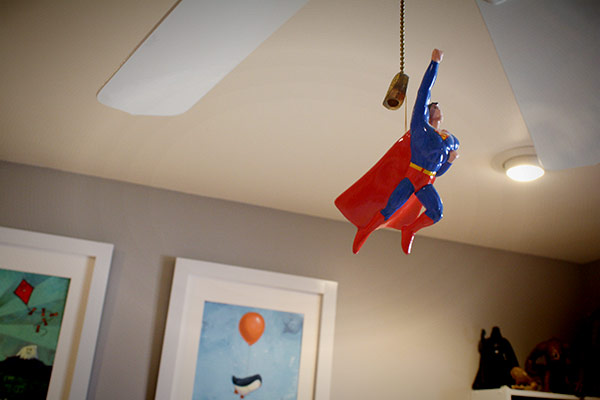 I have a whole shelf devoted to Seth Godin. Because he’s awesome, that’s why. 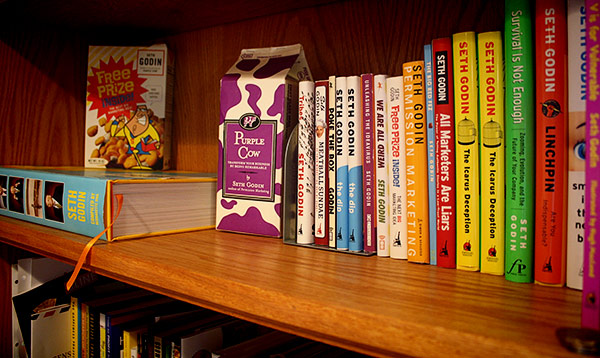 This is my shelf of evil. Got that authentic alligator head on my honeymoon. 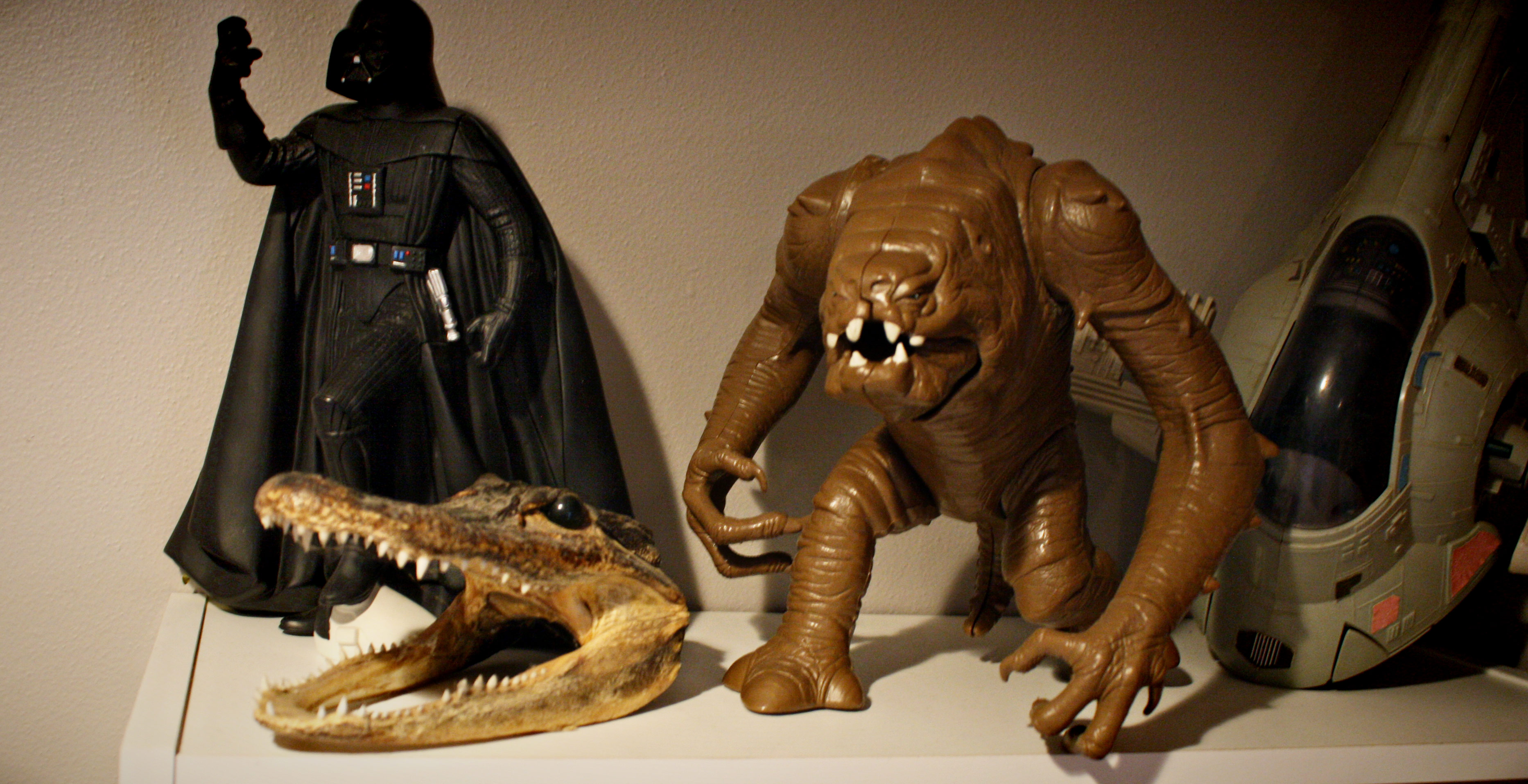 Spidey watches over my drafting table. 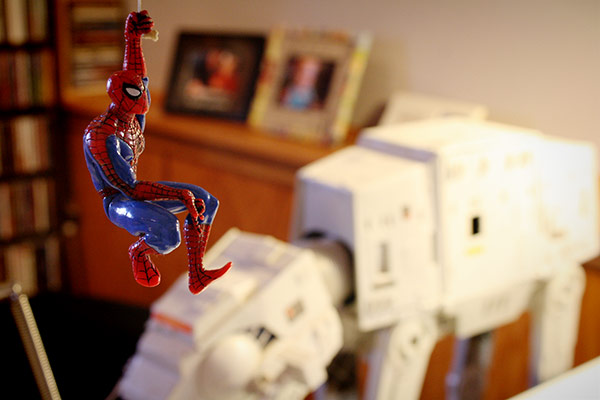 I do have a lot of toys. I affectionately refer to them as my board of directors. 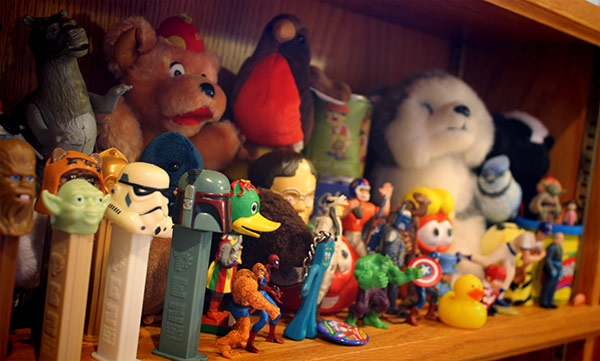 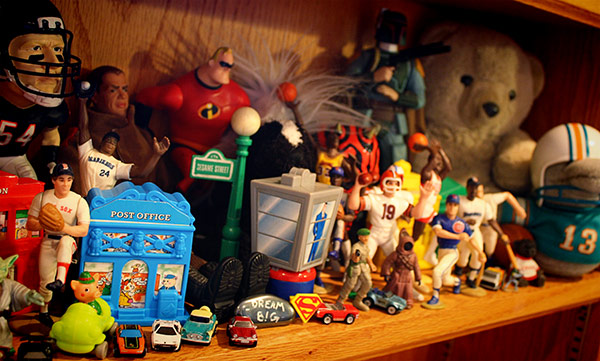 I call that Star Wars dude to Hulk’s right “The General.” I buried the original in the backyard when I was a kid and never was able to find him again. I discovered and purchased this replacement a few years ago on a “Man Shopping Trip” with my dad and brothers. 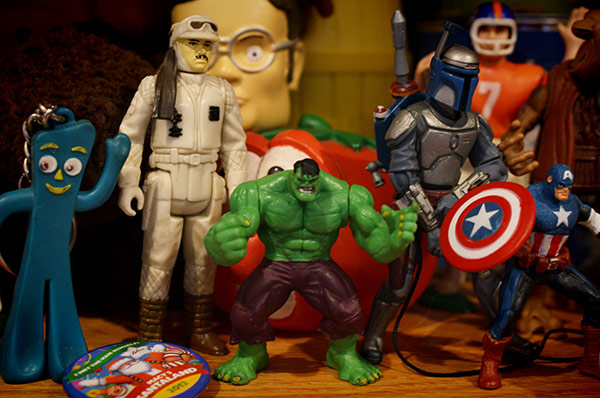 My Dad made this wooden train for me when I was little. Isn’t it the coolest? 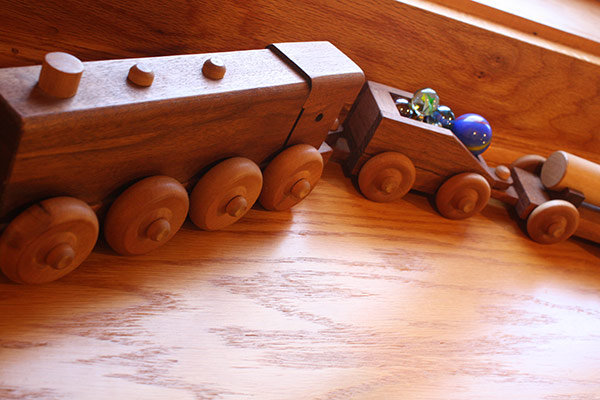