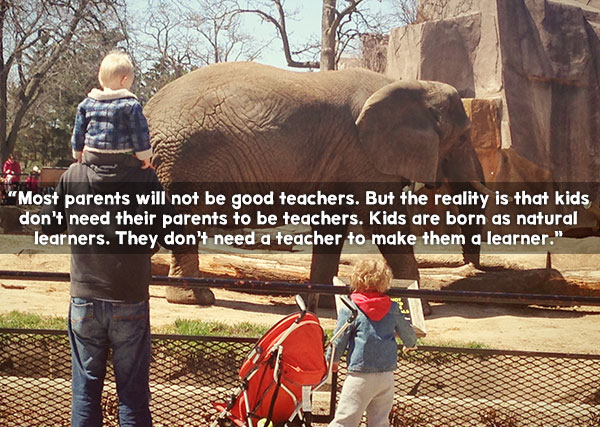 By some standards, Kim and I are at the beginning stages of homeschooling. On the other hand, if you subscribe to the belief that homeschooling begins at birth, then we’ve been at it for over five years. Either way, we are still in the stage of learning as much about it as we can. There are so many different styles of homeschooling, so many misconceptions about it, so much philosophy of how human beings actually learn, and so much history that led us to the educational system we have today.

It’s endlessly fascinating to us both. We regularly find ourselves deep down rabbit holes, voraciously exploring books and blogs on the subject and excitedly emailing each other links to gems we’ve uncovered. At times it feels a bit obsessive, but when I pause to remember that this is all about our kids’ education and future, I wonder why this kind of “obsessiveness” is not actually the norm.

Amidst all of the digging, some personal beliefs have grown more ironclad, while other times I’ve been surprised to find myself doing a complete about-face on some opinions I held pretty strongly just six months ago. 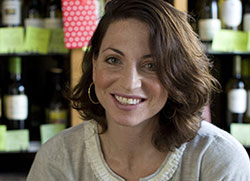 One of my latest rabbit holes has been Penelope Trunk’s blog on education. Kim and I interviewed her several years ago on how to avoid being overworked. We knew she was an expert at giving out career advice, but had missed the fact that she pulled her kids out of school to homeschool them.

What I love about Penelope is her deep vulnerability and ruthless honesty. She is not afraid to say things other people won’t. That’s how I’d like to be. I don’t agree with her on everything (if I did that would be kind of creepy), but I love how her writing affirms some of our decisions but also challenges me to question what I believe. Plus, she links to a lot of great research, creating even more rabbit holes to explore!

Below I’ve included links to some of my favorite posts of hers, with pull quotes from each that either challenged me, surprised me, or had me standing up and shouting, “Amen, sister!”

To be honest, I debated a bit about posting some of these, for fear that people will think I’m trying to “covert” them. Believe me, I don’t have the energy for such a crusade, and I have learned in my adventures as a professional speaker that it’s pretty impossible to change anybody else but myself anyway. But I do believe that sharing interesting stuff is a gift. Like Penelope’s writing does for me, it can either affirm what you already believe or challenge you to see things from a new perspective. Either way, it’s a gift.

So without further ado, here’s Penelope…

• Mainstream media is delusional about homeschooling
“Only 38% of all homeschoolers choose it for religious reasons. (And this includes the Lutherans, Hindus, Jews, etc.) But the majority are middle class parents just trying to get their kids out of a broken system.

So the way homeschooling works is that kids are home, learning, and parents are there for support. Kids need tools, or suggestions for how to get what they need, and parents are there to do that. Self-directed learning requires an adult to be very present, but not very intrusive. It’s why self-directed learning works great at home, and is nearly impossible at school.”

• 3 Stereotypes about homeschooling parents – and why they’re wrong
“I am not a good teacher, because it bores me. But luckily, it bores my kids too. They don’t want to be told what to do. They have their own ideas about what they want to learn. I am a good listener. I listen very carefully to what my kids say they want, and I try to translate that into what is possible for their life right now. The only thing a parent needs in order to be a good homeschooing parent is a deep sense of love for the child. Because then you’ll help your child find their way in an intimate, fun, family setting. But I’d never have known until I tried it.”

• Schools undermine parent confidence
“It’s important that the schools remind parents how difficult it is to teach kids because then parents will keep putting up with the crappy education their kids are getting in school—and parents will be grateful for it. Homework makes parents feel like they are unable to create a family-focused life because it will never feel as important as school work. Family schedules take second-seat behind the school schedule. If the school decides kids need more school days and less summer vacation, families comply. If a snow day means school goes longer in the summer, families comply.”

• In Hollywood, homeschooling is the norm
“People who control their lives do not let schools control them.”

• Best solution for balancing work and kids is homeschooling
“School ruins your calendar. If you send your kids to school you give up control over your family life. The demands of school are a moving target, and you never know when it will change. If you homeschool your kids, you have total control over your schedule.

The most difficult time to deal with kids are when they’re clingy, when they’re fighting for your attention, and when they don’t want to do what school tells them to do. But here’s what happens when you take your kids out of school. They see you all the time, so they don’t need to be clingy. They have your attention whenever they want it, so they don’t have to do insane tricks to get the small moments of attention they can get after school…So the worst parts of being a parent disappear when you take your kids out of school. Which means that being around them is actually much easier than you can anticipate. School makes kids artificially difficult and high maintenance to be around, which is why you think you could never get any work done while they’re there.”

• Back-to-school ads are a parade of arguments in favor of homeschooling
“School assumes you need to buy stuff in order to learn.”

• 5 reasons why you don’t need to teach math
“For the most part, the New York Times reports, you won’t need the math kids learn in school. You will never need to know when two trains going at different speeds will meet. We have train schedules.”

• The real reason parents don’t homeschool
“People don’t homeschool because they’re scared they’ll be bored.
Anyone can homeschool. Kids naturally learn stuff. It’s so well documented that it’s insulting to our intelligence to even argue this point. Kids are natural learners, which means the challenge of homeschooling is how to keep the parents who are home engaged and interested and fulfilled. The real choice for most parents is do they choose to have their kids bored at school or do they choose to be bored themselves at home? And the real question is, which problem is more easily remedied?”

• How to convince a parent to try homeschooling
“If you give a parent the choice between having eight hours a day of freedom from their kids, or spending eight hours a day forcing their kids to learn to read and do math at home, no parent will chose the latter. It doesn’t matter that homeschooling isn’t really like that. Non-homeschoolers think it is. So the key is to reframe the choice.

Do not talk about how great homeschooling is. Because the benefits of homeschooling are foreign to most parents. For example, watching a child manage his own learning. That’s amazing. But it’s hard to believe it works unless you see it. Spending the whole day, every day as a family. It’s a total joy. But no one would believe it if they haven’t done it.

Here’s the logic that I think sells homeschooling most effectively: School is terrible. Educated parents are taking their kids out. You need to take your kids out so they don’t get left behind.”

• The big lie homeschoolers tell
“The most arrogant, out-of-control part of the homeschool movement is the idea that ‘homeschooling is not right for everyone.'”