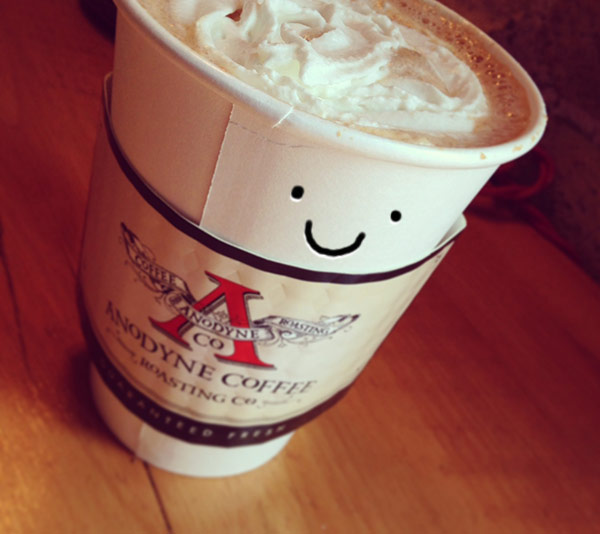 I approached the bandana-wearing barista and bared my soul.

“I have a confession to make,” I started. “I am a coffee virgin. I’ve never had more than a sip my whole life.”

The “here” she was speaking of was Anodyne Coffee. I was in Milwaukee working on the first draft for my next book. I’d heard good things about the place, and figured it would be a good spot to work. I love coffee shops, from the exotic smells to the hipster vibe. The only thing is, I don’t drink coffee.

On the twenty-minute walk from my hotel, the thought crossed my mind that maybe my trip to the coffee shop should include me drinking, you know, actual coffee. Even though I’d only ever had sips, I was pretty sure I wouldn’t like it, and it seemed like a pretty good way to waste $4.

Then I remembered Stanley. It was clear that regardless of my opinion of the coffee, ordering it would make for a better story than not. And at that, my decision was made.

“Normally I’d order a hot chocolate or something,” I explained to the barista, “But I figured today is the day. What would you recommend for a first time coffee drinker? What’s a good gateway drink?”

“Well,” she began, “If you like hot chocolate, you might want to try a mocha. It’s kind of like a hot chocolate with coffee in it.”

“Do you want whip cream?” she asked.

After receiving my drink, I found a spot to sit and took a sip. Instant deliciousness. Suddenly, a surefire way to waste $3.54 become a contender for the best $3.54 I’d ever spent. In a instant, a new world opened up before me. A delightful buzz coarsed through my veins as I pounded out a few chapters of the book. I decided to order another one.

I was a little concerned when the barista asked me if I wanted to “make it decaf this time, just in case?”

Just in case what? I thought to myself. I declined, deciding to cast my cares to the wind. I had a book to write after all!

I will say that I felt a lot like Jim Carrey in the movie Dumb & Dumber, when he was in the van, furiously pumping his arms back and forth, and said, “It’s like I’m running at an unbelievable rate, Harry!”

One thing’s for sure. It may have been my first coffee, but it won’t be my last. I am certainly glad I took the plunge.

Now, to the billions of coffee drinkers worldwide, me trying coffee for the first time is as trivial as it gets. (Although being the last person on a bandwagon may be somewhat notable.) But that doesn’t matter. What does matter is that I ignored Adultitis and said yes to something that had the potential to make my story better. Even if I had not liked coffee, at least I wouldn’t have the regret of wondering if I would have and wishing I’d tried it.

This is an excellent example of what I call tinkering: Little experiments of little consequence that have the potential to move your story in exciting new directions. For me, trying coffee was a case of tinkering. If I liked it, awesome! If not, no big deal. Either way, my propensity for adventure got a little bigger, and my story got a little better.

Don’t discount the small steps you could take today to make your story more awesome.

You never know where something as small as a sip could lead.

What’s something small you’ve done in the last week that made your story more awesome?