One of the most interesting (although not necessarily enjoyable) parts of this book-making adventure has been turning the nearly-finished version over to the lawyers. They scour the copy and artwork for potential legal land mines that could arise.

My editor warned me that companies that make toys are some of the most litigious and Adultitis-ridden entities around. Sadly, she was right.

A fair amount of my art features references to universally recognized pop culture icons from childhood. Most cleared the legal hurdles because they are relatively generic depictions. I was encouraged to change a few things, however, in order to protect us from lawsuit-friendly doo doo heads. So, I had to make this box of crayons into something more pedestrian. 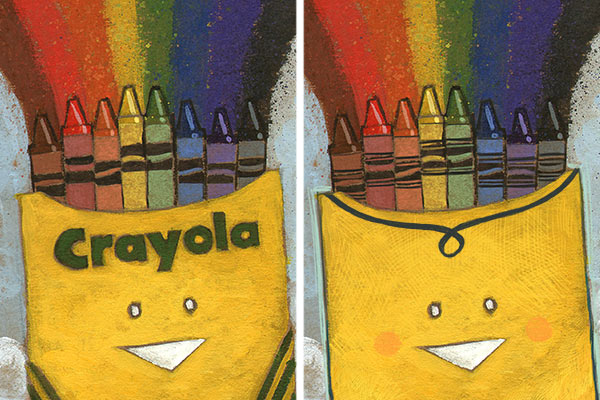 And I added the fork marks along the edges of this, um, toaster pastry, in order to keep it from looking too much like a certain something something. 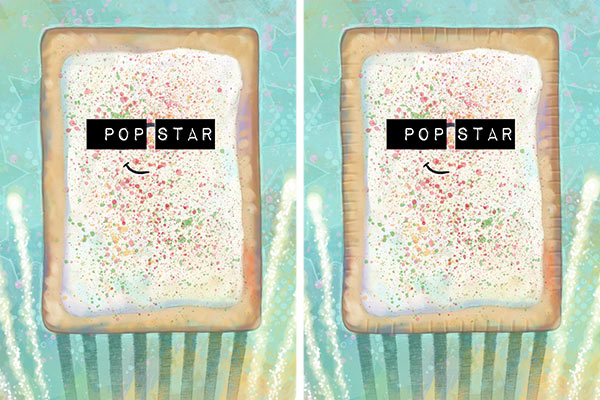 Whatevs. These were relatively easy changes to make, thanks to the power of a digital workflow.

The real challenge arose with the need to do something about the Fisher-Price Little People that appeared in a few pieces. We all agreed that changing them to look more generic would be lame. You’d lose all the nostalgia that comes from their iconic look. Of course, the iconic look is what creates the problem.

I suggested the idea of contacting Fisher Price directly, to see if we could get permission to proceed as is. After all, in the context of the book, it’s a minor element, and the art is a loving homage to the classic toy. In fact, it seemed like a potential win-win opportunity. Maybe Fisher-Price would see the value of having their beloved toys associated with such a positive, empowering (and we hope bestselling) book and even consider buying a bunch themselves to use as a promotional tools.

My agent Michelle offered to contact Fisher-Price about it and see what they thought. She sent along a detailed synopsis of the book and an example of the actual layout. She got back a pretty generic but definitive no. This is what they said:

Thank you for your interest.

We have reviewed, and must decline your request for permission to use the iconic likenesses of the Fisher-Price® Little People® figures in the soon to be published book.

Undeterred, Michelle followed up, if for nothing else than to get a little bit more clarity. To their credit, they sent her a reply:

Because the images you are asking about are of our older products, they do not comply with the current safety standards.

If people do have these older products, they could possibly give them to children to play with.

To say that we were all a little perplexed would be an understatement. Apparently, they want the world to forget that these toys ever existed. The idea of a parent seeing my book, fondly remembering the great joy they had playing with their Little People, and then being inspired to dig them out of the basement to share that joy (and positive association with the Fisher-Price brand) with their children, is like, the worst thing ever.

The ironic thing is that three years ago, we did this very thing. Kim excavated her collection of Little People out of her parents’ basement for our young children to play with. We’ve even purchased additional vintage sets on eBay to give as Christmas gifts. They are one of the top three things our kids love playing with, hands down. A true classic.

And I am happy to report, no choking deaths thus far.

(The good news is that I know who to sue if there are. :)

Although I was really disappointed to hear their decision, I hold no ill will toward Fisher-Price. Obviously, they are ultimately trying to limit their liability here, but the whole thing just reeks of adults ruining everything. This reality that we live in, one that includes lawyers fearing other lawyers, lawsuit-happy jerk heads, and the complete disregard for common sense, is the essence of Adultitis unleashed.

We have a long fight ahead of us, friends.

Ultimately, I had to remove any appearances of the Little People from my book, which meant having to create all new art. Thanks to some inspiration from fans and readers, I was able to develop a new concept that I think actually enhances the message even more. (Here’s a sneak peek.)

I also had to figure out what to do with a painting of a toy band that featured the classic Little People dog as the lead singer. 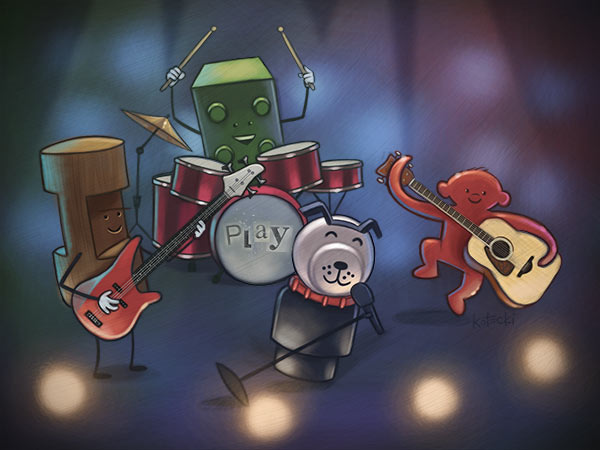 So in a move that is reminiscent of Van Halen replacing David Lee Roth with Sammy Hagar, the dog got bumped in favor of a gummy bear. He beat out Green Army Guy and Rubber Duckie, even though he is not even a toy. (A victory for diversity!) 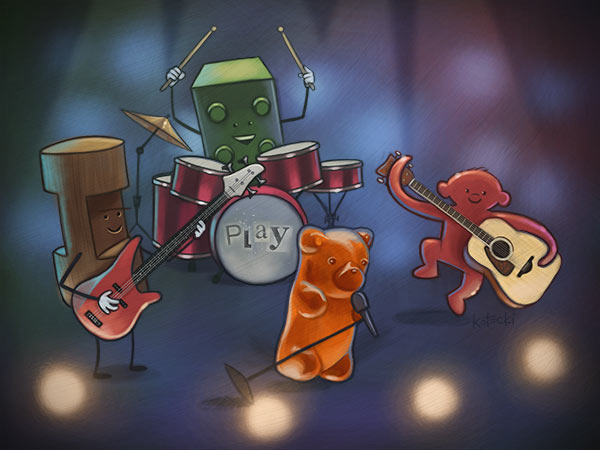 I’m not sure if the band will ever sound the same, but the at least the gummy bear was pretty fun to paint.

And just think of all the millions of children who will now be safer for it.