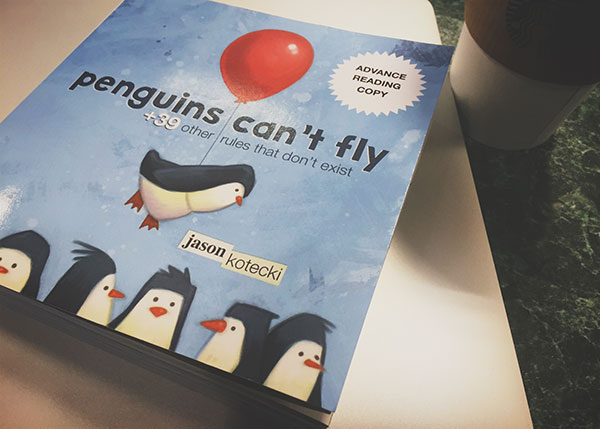 Many folks have asked me how I got my book deal. Basically, a literary agent came out of nowhere after seeing my art on Facebook, asked if she could represent me, pretty much wrote the proposal, and pitched it to a bunch of big New York publishers in person.

I know. If ever there was a “must be nice,” this is it. And it’s completely unhelpful for anyone looking to land a book deal of their own.

But that’s not really the full story. The real story is a bit longer and a lot more useful.

It starts about ten years ago during Kim’s lunch break when she was still teaching kindergarten. She would use these off hours to make sales calls for our young business. One day, she connected with a religious education director named Mary Jo, who took a shine to us and hired me to speak at her church. She insisted that there was a market waiting for us if we created a faith-based program that could hold the attention of both kids and adults. She was right. Her insight was what helped launch my speaking career and led to Kim’s retirement from teaching.

A few years later, we moved into an office space and held some cartooning workshops. We promoted it to our newsletter subscribers, and the mother of one of the girls who attended had been in the audience of that early program at Mary Jo’s church.

Fast forward about four more years, and we landed an awesome gig for a well-known technology company in Madison. The executive who helped approve the contract was Kristin, the very same woman who’d heard me years earlier, and whose daughter had attended the cartooning workshop.

Then, one of the employees of the tech company that hired us shared some of my art on Facebook to help promote the conference. And that person had a tenuous connection with Michelle, who saw the art and eventually became my agent.

It’s not a stretch to say that the book deal we got can be traced back to a cold call to a church about a potential speaking opportunity over ten years ago.

After really mulling over how things transpired, I’ve been able to uncover a few lessons that anyone can apply, whether you’re trying land a book deal or not.

Your Failures Aren’t Always Failures.
We’ve tried a lot of things over the years, and most of them haven’t worked. (Did you know that we used to have a fundraising program where schools could sell our greeting cards for profit?) Too often, I let those disappointments discourage me. But for every thing that didn’t turn out as we’d hoped, something came out of each one that helped contribute to a success somewhere else. We don’t do cartooning workshops anymore, but I never could have predicted the role they’d play in getting us to where we are now.

Show Your Work.
The primary reason my art was on Facebook for my agent to discover through a friend of a friend was because I read Show Your Work by Austin Kleon. In the book, he suggests that the best non-slimy way to promote yourself is by simply spending a little time every day sharing what you’ve done.

Serendipitous things happen all the time, but only to those who put themselves out there. As an artist, I can attest that it can be scary to put your art into the world for public consumption. What if people hate it? Or worse, what if people don’t care? Sometimes it’s more appealing to live in the fantasy that your art is great and amazing than risk encountering the reality that it most certainly is not.

One beautiful thing about the internet is the opportunity it gives us to scatter a breadcrumb trail of work that people of influence can stumble upon. And scatter you must, for you never know who might find their way to your front door.

Live In Your Core.
We are all great at a few things. Even more than being a speaker or a writer or an entrepreneur, I am an artist. Always have been. It’s probably the thing I do best and enjoy the most. But there was a stretch there where I wasn’t making any art at all. After I retired my daily comic strip, I was burned out, tired, and disappointed that my efforts had not delivered better results. I entered into a fallow period.

Eventually, the call to create started to bubble up again. I resisted for a while because I couldn’t rationalize how it would help our business. I was inspired by people like Marc Johns and Scott C. and began sketching and experimenting. There was no motivation to create something that would sell, I just allowed myself to play. Eventually, a new style began to emerge as the fire returned. A big part of me that had been dormant for so long was suddenly awake. It resulted in the creation of art that became the cornerstone of the book proposal that convinced the publisher to go all out in full color.

Great things happen when you obey the promptings of your soul and spend as much time as possible on the things that make it sing.

Do The Work.
Everyone is looking for shortcuts, but there is no substitute to sitting your butt down in the chair and doing the work. You need hours set aside to make progress on the stuff that matters, not the busywork that only feels productive. If you’re an artist, you have to make art. If you’re a writer, you need to actually write. If you want to run a marathon, you need to spend time running. My friend Chris says, “Thinking about writing is not writing. Only writing is writing.” Seems obvious, but it’s amazing how easily this little fact is ignored.

At the time I made the commitment to refocus my attention on making more art, there was no immediate financial payoff involved. Spending time bringing sketchbook doodles to life was not putting money in my pocket. There were many other things that would have provided a more tangible return on investment. And as much as I enjoyed making the art, there were many nights when dragging my butt into my studio was not nearly as attractive as watching another TV show with Kim, or just going to sleep.

I made a commitment to just make art and not worry about where it would lead. And the best stuff — including the art that would eventually become the cover — came not from some late-night lightning bolt of inspiration, but from the hard slog of sketching and painting, even when I didn’t feel like it.

Never Ever Ever Ever Give Up.
Winston Churchill had it right. I dare say that persistence is the biggest key to any success I’ve had. Don’t keep doing the same thing over and over, but don’t stop trying, either. If something doesn’t work, try something different. Hang in there. Tinker. All of the so-called overnight successes I’ve ever encountered have an unheralded backstory filled with persistence and a lot of hard work and failure that most people never see.

We’ve been on this journey for fourteen years. I’ve made a lot of art in that time. I’ve given a lot of speeches. And I’ve done a ton of writing (2,000 comic strips and almost 3,000 blog posts and counting.) Over that time, we’ve never had what would be considered a big break, but we have slowly built a solid platform, and that platform was one of the things that impressed the publisher and led to us getting a deal. And this book was relatively easy to write because it’s basically a greatest hits of more than a decade’s worth of work.

In closing, what I just laid out for you is not a step-by-step, color-by-number strategy for securing a book deal with a major New York publisher. Those don’t actually work all that well anyway.

But it is a pretty foolproof blueprint to follow if you want to make good things happen and create your very own “must be nice.”