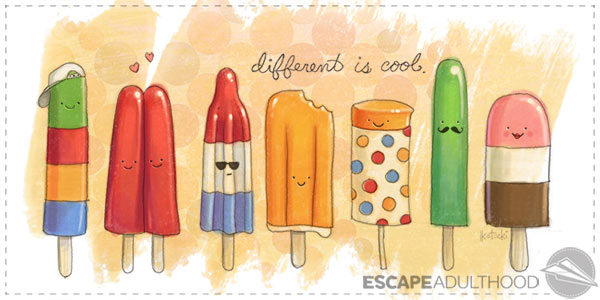 I recently had a conversation with a scientist about how scientists are kids who managed to grow up with their curiosity intact, and now get to play with even cooler toys.

She expressed frustration that for a scientist, the Adultitis often sets in when submitting one’s work for review to the scientific community. The paperwork alone can be a nightmare, but most often it’s the curse of common knowledge that’s the real culprit.

Sometimes new theories appear pretty “out there,” challenging the very foundation of the status quo. It’s tempting to label the authors of these theories as kooks, dismissing them out of hand. Certainly, there are times when crackpot theories really are crackpot theories. But it is awfully dangerous to allow dismissal to be our default reaction.

For instance, there once was a man named Iggy who put forth a theory that had the potential to save countless lives. But it flew in the face of the established scientific and medical opinions. The crazy thing is, when it was tested, it worked. Every time. The only problem was that Iggy couldn’t give a scientific reason as to WHY. So poor Iggy was labeled a crackpot and was eventually committed to an insane asylum at the age of 47 and died 14 days later, after being beaten by the guards.

So what was Iggy’s crazeballs idea? Just that it might be a good idea for doctors to wash their hands before working with patients.

Fortunately for Iggy, formally known as Ignaz Semmelweis, a small group of curious scientists experimented with the procedures that he proposed, and his theories finally gained widespread acceptance years after his death, partly thanks to Louis Pasteur’s scientific confirmation of germ theory.

“The so-called Semmelweis reflex — a metaphor for a certain type of human behaviour characterized by reflex-like rejection of new knowledge because it contradicts entrenched norms, beliefs or paradigms — is named after Semmelweis, whose perfectly reasonable hand-washing suggestions were ridiculed and rejected by his contemporaries.”

It’s outrageous to think that scientists could be swayed by ridiculously irrational judgements and assumptions. After all, aren’t they supposed to be all about rational, systematic ways of acquiring knowledge?

But alas, scientists are still human, and we are all prone to this behavior. How many times have you prejudged someone, only to find that after getting to know them better, your initial appraisal was way off the mark? (most of my best friends fall into this category.)

We are taught in after-school specials that prejudice is bad, and if we catch ourselves doing it, we often feel guilty or ashamed. But my good friend Jessica Pettitt, who is a champion for social justice, reminded me that we shouldn’t feel guilty for making these judgements and assumptions, because we often make them for really good reasons. For example, to feel safe, or prepared.

What really matters is what we DO with these judgements and assumptions.

Jessica’s suggestion is this: “When you write that first story, print it as a draft, triple-spaced with extra wide margins. You do this because you’re anticipating edits.”

The scientists who originally branded Iggy a crackpot weren’t jerks for thinking that his ideas were weird. They were jerks because they didn’t leave enough room for edits to their original story about him. Which is a shame when you think about how many lives could have been saved.

Hopefully our actions will not lead to such life and death consequences, but it’s still worth remembering that not all kooks are kooks.