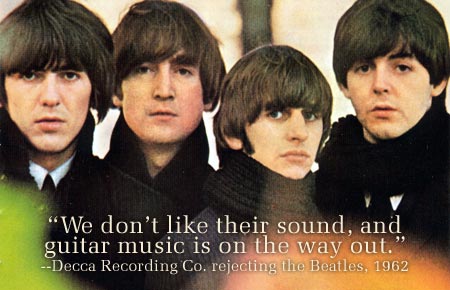 One of the advantages children have over adults is that they are not yet bogged down and limited by “common knowledge.” For children, everything is on the table. They see life in a colorful kaleidoscope of possibility. As they get older, the world is all too eager to impart its “common knowledge,” informing them of what’s really possible, and what’s really not.

Talking heads — folks with fancy degrees, oodles of experience, and impressive titles — squawk their opinions on our TV sets and “Internets” and we are expected to accept their guesses as factual truth. If only their track record would make it feasible. Just a year ago, “common knowledge” told us that Hillary Clinton and Rudy Giuliani would be squaring off in this summer’s general election. Money and time was spent conducting national polls to determine who was more likely to be elected President.

Resources wasted on a prediction that fell flat.

Here are some more bold predictions made over the past 150 years by people with fancy degrees, oodles of experience, and impressive titles:

I think there is a world market for maybe five computers.” –Thomas Watson, chairman of IBM, 1943

“There is no reason anyone would want a computer in their home.” –Ken Olson, president and founder of Digital Equipment Corp., 1977

“We don’t like their sound, and guitar music is on the way out.” –Decca Recording Co. rejecting the Beatles, 1962

“I’m just glad it’ll be Clark Gable who’s falling on his face and not Gary Cooper.” –Gary Cooper turning down “Gone With the Wind.”

“This ‘telephone’ has too many shortcomings to be seriously considered as a means of communication. –Western Union internal memo, 1876.

“The concept is interesting… but to earn better than a ‘C,’ the idea must be feasible.” –Yale professor on conceptual paper that became FedEx.

“What would I do? I’d shut it down and give the money back to the shareholders.” –Michael Dell on Apple, 1997.

“Everything that can be invented has been invented.” –Charles H. Duell, Commissioner, U.S. Office of Patents, 1899.

Whether it’s politics, the economy, global warming, business, or even the decisions you make in your day-to-day life, you will run across people more than willing to give you a little helpful, well-intentioned “advice.” They’ll sound quite convincing. And their fancy degrees, oodles of experience, and impressive titles may make you feel inclined to listen to them.

They’re not always right. It’s your choice whether or not to believe them.