That Time I Slimed Adultitis 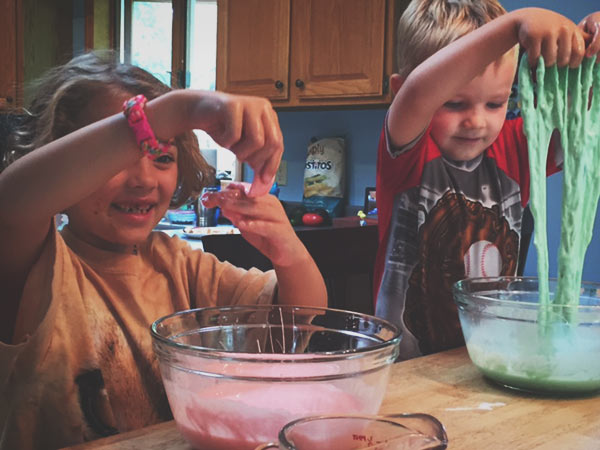 Yesterday morning, despite the fact that I had a full to-do list after having been out of the office for the first three days of the week, I decided to make slime with the kids.

They had been watching episodes of DIY Dad on YouTube, and the one on slime seemed especially fun, and not particularly hard. Out of the blue, I alerted my pajama-clad son that we were going on a secret mission: to get the supplies we needed to make slime!

He jumped off the couch and scurried into his car seat — still in his pajamas — and off we went to the grocery store. We picked up two bottles of Elmer’s glue, Borax, and some donuts for good measure. When we got home, my oldest was up, and after our sprinkle-covered sweet treats, we went about making some slime.

It was a blast.

I do not submit this story in order to enter myself as candidate for Dad of the Year. I share it as an example of how difficult it is to do things like this. I make a living encouraging people to toss aside the never-ending to-do list once in a while and spend time with the people they love, in the hope of helping people have as few “I wish I woulda’s” as possible.

People nod their heads, knowing how important it is. But it’s still hard.

I had a full slate of things to do, and only two days to do them before I was out of the office again. It was tempting to tell myself that we could make slime another day when I had more time. It would have been a lot easier (and less messy) to just stick with the plan.

But then I thought of the dear friend who saw one of her twin daughters through neuroblastoma when she was three. Now, twelve years later, this mother’s worst nightmare has come true as the sister has been diagnosed with the stage four version. The prognosis is not good.

And then I thought, “What the hell am I waiting for? A wake-up call like that?”

I wanted to make slime with my kids.

If not now, when?

I’m glad I did it. I don’t do stuff like this as often as I’d like to. It’s easy to want to be the parent who ditches some work for some spontaneous play with their kids, or the person who surprises her friend with tickets to an afternoon matinee at the movies. But it’s hard to actually ditch the guilt, ignore the shoulds, get off your butt, and just freaking DO it.

It’s easy to lie about doing it later. The danger is that eventually, later disappears.