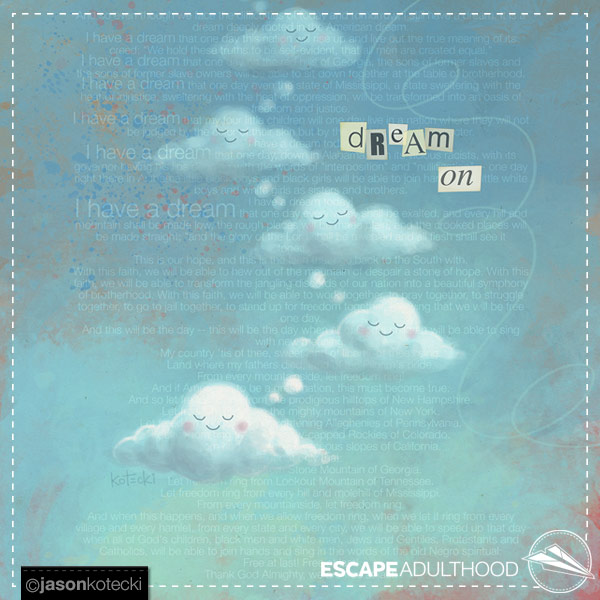 I love encouraging people to think of themselves as artists, regardless of whether they can draw a convincing bowl of fruit. Because my definition of artist goes beyond people who can draw or paint or sing or sculpt or dance. I think Martin Luther King, Jr. was an artist, not just because he was a great orator, but because he took a stand for something. That’s what artists do.

The problem is that examples like this are pretty intimidating. I am no Martin Luther King, Jr. And, no offense, but neither are you.

The thing we forget is that neither was he. At least not the MARTIN LUTHER KING JR. we think of today, the larger-than-life American hero who has his own holiday and over 730 streets named in his honor.

He was an imperfect man who tried to make the world a better place. Even though a million people followed him eventually, it’s important to note that those first few steps were small and quiet and mostly unnoticed.

Don’t be fooled into believing that you can’t make a dent in the universe. You can, and we need you to try. Be inspired by — but not intimidated by — the giants that came before you, because they weren’t always giants. Channel that inspiration into action.

You may not end up with your own holiday or being named a saint, but if that’s the reason you’re doing it, I can guarantee that you’ll fail.

Making the world better is not at easy as binge-watching Netflix. It takes a heckuva lot more courage than writing a check to your favorite charity. But you can start today, in your own family or community, with one small step.

Artists don’t sit on the sidelines, watching the world go by, wishing it was different.

Artists are people with big dreams who take small, deliberate, and brave actions to see those dreams come true.