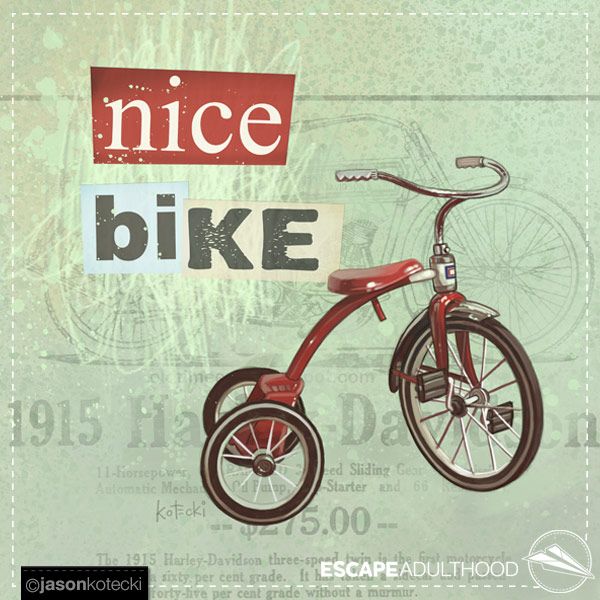 I recently shared seven things I learned watching my dad work for nearly four decades at a lumberyard in Illinois. I’m back with seven more, because my dad is quite a guy and he taught me quite a few things. Interestingly, most of these lessons came not from what he said, but from watching what he actually did.

1) Own what brings you joy, regardless of what anyone else thinks. For as long as I can remember, my dad has owned a little red scooter that featured almost as much horsepower as a single three-legged horse. He rode that thing to work every single day, drizzle, snow, or apocalypse. He bragged about the gas mileage he got, even though he looked impressively uncool. But you know what? He didn’t care. He loved that sweet ride, and he loved the savings it brought our family. No amount of ridicule was going to change that. Which is actually pretty cool after all.

2) You don’t have to be the boss to be a leader. My Dad didn’t own the lumberyard and he wasn’t the top manager, but every last person there respected him. He was the go-to guy for a lot of people who needed advice or something to get done. It’s easy to be frustrated by the lack of power you may have in your job, but you don’t have to have a title to make a difference.

3) If you want to remember something later, write it down now. My dad carries a little yellow notepad around like I carry my smartphone. (Except he never needs to worry about recharging anything.) His famous notebooks were crammed with to-do lists, details for projects he was working on, lessons he learned, quotes that struck him, and God knows what else. But if he ever needed to remember something, he knew exactly where to look.

4) Don’t be afraid to try new things. Even though my brothers and I kid my dad for his less-than-graceful handling of new technology and its corresponding terminology, I have to hand it to him. He never complained about learning something that could make his life better. Whether it was a new computer system at work, or studying to get his real estate license to bring in extra cash, he wasn’t afraid to get in there and learn something new.

5) You can make beautiful things out of stuff other people consider junk. My dad is an excellent carpenter. His home, and now the homes of his children, are filled with beautiful handcrafted furniture that were made with scraps of wood too damaged to sell. I’d say that his superpower is hiding knots on boards most people would consider subpar, except for the fact that he’s not just great at seeing hidden potential in unwanted things. As a champion for underdogs, he’s great at spotting the hidden potential in unheralded people, too.

6) Sometimes you have to do things you don’t like to take care of your family. My dad liked his job, but I know he didn’t like every minute of it. There were many frustrations, challenges, and disappointments. And yet he carried on, day after day, year after year, because that’s what he needed to do as our family’s chief breadwinner. His sacrifices remind me that my role as husband and father is way more important than my role as artist, author, or speaker.

7) Everything works out for the best. If there was ever a quote my dad did beat to death, it’s this one. It stuck with me, and not just because he repeated it more times than a two-year-old screams “Me!” It’s because he actually lived it. If we returned from vacation to find Godzilla sitting on our house and sucking on my dad’s red scooter like a jaw breaker, he would undoubtedly declare, “Everything will work out for the best.” In his world, people are the most important thing, everything else is just details, and there is a God out there who knows what he is doing regardless of whether or not we can figure it out.

I’ve only been around for forty years, but so far, I’ve never seen my dad proven wrong on this one.

Wha’s the biggest lesson your dad taught you?