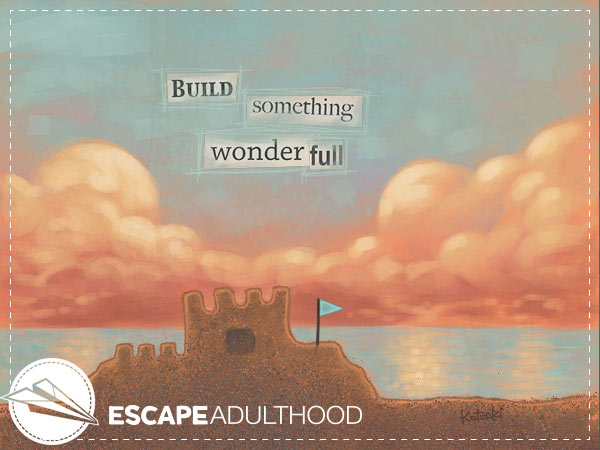 Don’t be fooled by their bed heads and their gnat-sized attention spans; kids may seem to be the epitome of UNproductivity, but they can teach us a lot about how to do stuff that matters.

There are all sorts of strategies and systems for planning, but it’s hard to beat a good old fashioned list. I have one big list of things I’d like to get done eventually. At the end of each week, I pull from that to create another list of things I’d like to accomplish next week. And every night before I go to bed, I make sure I’ve written down the main things I want to tackle the next day.

This might be the most obvious and least insightful tip here. But it’s worth noting that this wisdom was not given to us by self-help gurus. It may not be all written out, but when kids go to bed at night, they know exactly what they want to do the next day — “I’m gonna build a huge fort with my Legos tomorrow!” And didn’t you have a list of things you wanted to be when you grew up? (By the way, kids think it’s entirely possible to fit being a sports announcer, movie star, cowboy, and President of the United States into one lifetime. Sounds crazy, except that they’re right –– just ask Ronald Reagan!)

As true as it is that children know the big thing they want to dive into when they wake up, it is also true that they don’t over-plan the day. They don’t say, “I will wake up at 6:00 a.m. and play with my Legos until 8:00. Then I’ll color in my coloring book until 9:30, when I’ll have myself a snack before three laps around the block in my tricycle…”

The secret that kids can teach us is that they have a definite idea of the MAIN thing they want to accomplish during a day (the thing that will make the most difference), but they leave a lot of air in their schedule for the unexpected things that come up. For children, that might be a serendipitous opportunity to observe a caterpillar. For us, it could be the little moments that present themselves and make life worth living, such as a call from a long-lost friend, a quick stroll on a beautiful day, or an impromptu lunch with your significant other. These are the missed portfolio pieces that fly right by us when our knuckles are white and our nose is to the grindstone, as we try with all our might to be “productive.”

It seems counterintuitive that napping would make you more productive than plowing through the work ahead of you. But science backs it up. A study in the research journal Sleep showed that a 10-minute nap produced reduced sleepiness and improved cognitive performance. A study at NASA found that a 40-minute nap improved performance by 34% and alertness 100% in military pilots and astronauts.

Interestingly, most mammals are polyphasic sleepers, which means that they sleep for short periods throughout the day. Humans are monophonic sleepers, with two distinct periods, one for sleep and one for being awake. Scientists aren’t sure if this is our natural sleep pattern, but it would seem that kids are on to something.

Sleeping on the job still has a negative connotation, but it’s worth noting that there are many famous and highly productive nappers. And here are some great tips on how to nap at work.

“Getting stuff done” is not the same as being productive. It’s easy to get lost in the almighty to-do list, where the most important thing becomes crossing everything off the list instead of keeping in mind why you made the list in the first place.

When you die, your to-do list will STILL have items on it. Lots of ’em. The idea that we’ll actually ever cross everything off our to-do list is a lie. It’s a trap set by Adultitis that tricks us into ignoring the little things, the Cracker Jack prizes, that make our lives fun, enjoyable, and truly fulfilling. As it has been said, it doesn’t do any good to climb the ladder of success if when you get to the top, you find that the ladder was leaning up against the wrong wall. Every once in a while, we need to step back from our work and ask, “Why?”

“Why am I working on this project?”

“Why am I doing this right now?”

“Why is this the best use of my time?”

Kids mind their passion. They do things that they feel are exciting, interesting, and fun. Being a “grown-up” means we sometimes have to do things that aren’t always pleasant, but it doesn’t mean we have to chuck our passions out the window. It doesn’t do anyone any good to accomplish all kinds of stuff in the name of productivity, if the stuff you’ve accomplished doesn’t amount to a hill of beans.

The BEST way to be truly productive is to be working on something that inspires the heck out of you in the first place.