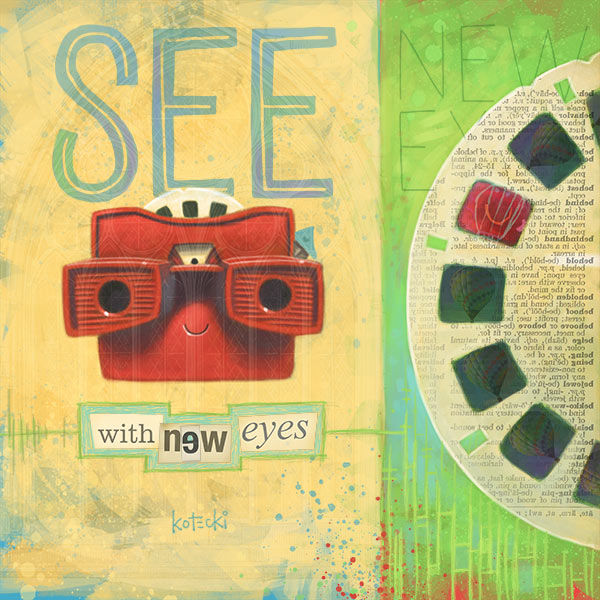 It was time for new glasses. Besides being over four years old, my frames were one kid bump away from total obliteration.

We went to a cool place on State Street in Madison. I was confident I’d be able to find something unique. Two minutes into our exploration, I was not so sure. Styles change quite a bit in four years, and none of the fifteen frames the dude recommended impressed me. They bordered on hate. I swear that they got some of the styles directly from 1992. The clear plastic bus windshield frames were not cool when I was a sophomore in high school, and no trendy designer is going to convince me that they’re cool today.

I was prepared to walk out of there with no glasses, resolved to make friends with duct tape if my current pair bit the dust.

I didn’t think I was asking for too much. I merely wanted something similar to what I already had, but different.

It’s kind of like how some people prefer their change: I’ll take a little bit, but not too much.

Matt told me that my plight was a common one: You get so used to seeing your face in a particular style of glasses, and everything else just looks wrong. He assured me I’d eventually find something.

After about thirty minutes of trying on over two dozen pairs of frames, he was right. I was able to narrow the field down to seven contenders. Then after my eye exam, I picked one pair that I really, really liked. It’s quite a departure from my old frames, but still me. And not clear plastic.

A large portion of our happiness is determined by how we decide to see things. Every once in while we need to change our glasses.

You’ve heard it many times: you can’t control what happens to you but you can control how you react to it. The benefits of looking at things from a new perspective certainly inspire us to try. But it’s worth keeping in mind that reality is a different animal.

It feels awkward and contrived at first. After all, your old way of seeing has gotten really comfortable. It feels funky at first, trying to convince yourself that losing your job or getting dumped by the person you thought was the one is a good thing. You might try that perspective on for a bit, but it just seems “off.”

That’s because you’re used to seeing things the old way.

Don’t give up; give it time.

Eventually, you’ll get used to this new pair of glasses and you’ll wonder how you ever got along with those old ones.